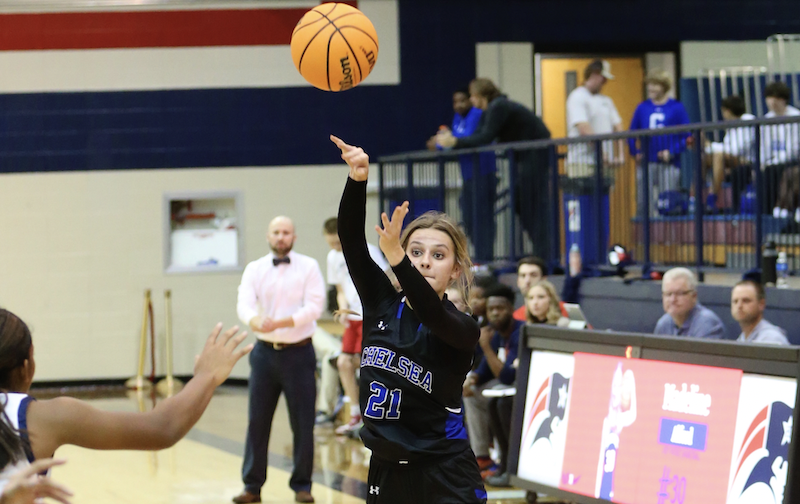 CHELSEA – The Chelsea Hornets girls’ basketball team defeated the Helena Huskies 43-27 on Tuesday, Dec. 6. The Hornets overcame their 17-16 first-half deficit with a powerful performance in the remaining quarters of the game.

Sadie Schwallie followed Pryor with a two-pointer and Chelsea’s only three-pointer of the first half. Madison Moore totaled three points to top off Chelsea’s halftime score.

A much more aggressive Chelsea offense returned to the second half of the county matchup. The Hornets totaled 15 points in the third quarter and ended the game with another 11 in the final quarter.

Moore led Chelsea in the second half with three two-pointers and a single three-pointer. Sophia Brown followed Moore with six points from two baskets knocked down inside the arc and two from the free-throw line.

Chelsea’s Haley Trotter totaled four points in the third quarter, while Pryor tagged in three more points of her own. Schwallie finished the night with another two points.

Helena was limited by Chelsea’s defense to only being able to obtain four points in the third quarter and six in the fourth quarter. Johnigan led the Huskies in the second half with two baskets knocked down within the arc during the third quarter.

Brooklyn Kelley, Grant and Moody finished the night for Helena in the fourth quarter with a combined six points.

Chelsea travels to Sylacauga on Thursday, Dec. 8, while Helena returns home to take on McAdory.