Curry was elected to serve a third-consecutive term by Shelby County citizens. Curry had 20,475 votes to Bailey’s 2,477 votes when all of the returns came in.

Curry, who defeated his opponent Ken Bailey of Hoover, mingled from table-to-table thanking his supporters throughout the night.

“I’m very blessed by the support the citizens gave,” Curry said. “That trust has been earned by all of our employees and all of my co-workers. It’s been a competent and professional effort.”

Curry said he believes voters re-elected him because of the accomplishments of his department during his first two terms.

“I think the citizens voted for the team,” Curry said. “It wasn’t about Chris Curry. We’re continuing to provide a high level of service, honesty and integrity.”

Curry began his law enforcement career as a reserve deputy with the Shelby County Sheriff’s Office beginning in January of 1980.

A 1985 graduate of University of Alabama Law Enforcement Academy, Curry was appointed Captain – Operations Manager at the Sheriff’s Office in January of 1991.

Curry was appointed as the Sheriff’s Office Chief Deputy in May of 2001 before being elected Sheriff of Shelby County for the first time in January of 2003.

Supporters feasted on fish and barbeque as they watched the returns scroll across a projection screen at CUMC. Calera mayor Jon Graham and Alabaster mayor David Frings were among the early arriving crowd.

There was slight applause as the early returns showed Curry with a sizeable lead over Bailey. Supporters began congratulating Curry and filing out shortly before 9 p.m.

Curry called his supporters a “big family” and gave them credit for his successful re-election.

“I would like to thank the citizens and my co-workers,” Curry said. “It’s a big family of friends and supporters. There’s a network of people that have assisted me with guidance, response and resources.”

Curry asked a few of his younger supporters to take a gift of appreciation with them — a blue “C” Curry for Sheriff sticker that’s been seen on vehicles around the county leading up to election day.

“Take plenty of them,” Curry said. “Wallpaper your room with them.”

Bailey, a Hoover resident who is currently a Deputy Sheriff in Jefferson County, was running for Shelby County Sheriff for the first time.

Bailey remained enthusiastic until the final votes were counted.

“I really don’t have much to say,” said Bailey, with Curry holding a sizable lead over him late Tuesday night. “We’re still looking at the votes.”

So much to be thankful for this year 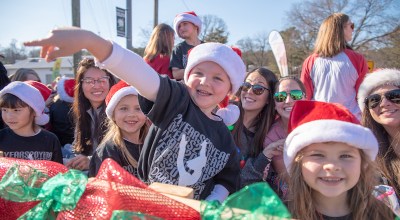 City of Helena is ready to bring the Christmas spirit