Fish are friends to Helena artist

Helena artist Brian Wallis works in the studio in his home on August 9. (Reporter Photo/Jon Goering)

Swordfish and great white sharks aren’t often found in Helena, unless you’re in the studio of local artist Brian Wallis.

Wallis’s business selling his original artwork began as a hobby, he said. He fell in love with the ocean on his first fishing trip on the Atlantic when he was only 8 years old. Since then, he’s always been doodling and drawing fish, he said.

“If I can’t catch it, I’m going to do it here at home,” he said of his paintings. 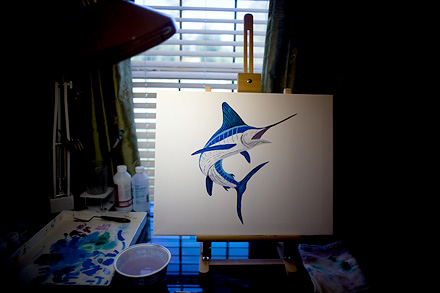 The hobby soon became a business, Blue Water Art Works, which he runs out of the studio in his home in Helena. Being located far from the ocean can sometimes make him a fish out of water, though.

“The problem is finding a market,” he said. “When you’re here in Helena, there are not as many opportunities to sell your work.”

He’s started traveling to art shows across the county and visiting marinas and salt-water tournaments to try to remedy the problem, he said. His hard work has begun to pay off, and he’s found many customers outside of Alabama.

“A guy in London and a guy in Alberta, Canada both have my artwork,” he said “Also a rather big rock star and a newscaster at NBC in New York.”

Wallis said one of the things that make his artwork unique is that he doesn’t use any digital manipulation. He paints all his pieces freehand, with just a picture as a guide.

“All my art is original. I don’t do prints,” he said. “Many people are too quick to do the digital thing. They scan in a picture, manipulate the colors and print it out. Or they scan one in, superimpose it on canvas and paint it like a paint by numbers.”

Nationwide there are several other artists who specialize in saltwater fish, Wallis said. But he’s not trying to do what they’ve done.

“I’m doing my own thing,” he said. “I don’t want to be them. My trademark is my black and silver paintings.”

Cocktails in the Gardens

FischerGreen is one of three bands slated to perform in this month's Cocktails in the Gardens at the Birmingham Botanical... read more