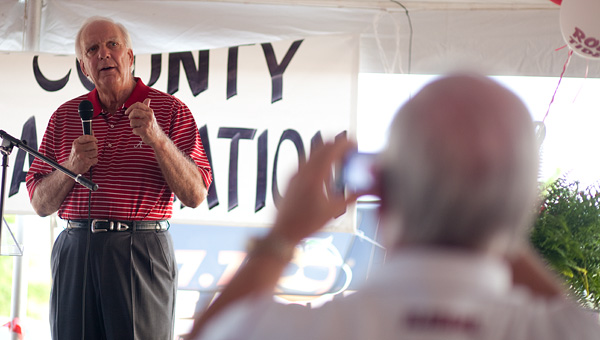 Crimson Tide fans can expect an improved game-day experience this fall while watching the defending national champions take the field in a newly expanded stadium, University of Alabama Athletic Director Mal Moore told a group of fans in Pelham Aug. 10.

The alumni club held the event to celebrate its first two local scholarship recipients, who will be attending Alabama in the fall. Taylor Beall and Emily Sharman, both Pelham High School graduates, recently received the club’s first two scholarships.

“Both of these ladies have worked very hard, and we are glad we could help them out,” said Randy Shealy, vice president of the alumni club. “We need everyone’s support so we can continue to send more well-deserving students to the University of Alabama.”

“Our quad is one of the most beautiful atmospheres in the entire country. It’s the most festive setting I know of,” Moore said, drawing applause from the crowd. “You have a lot to be so very proud of in your university.” 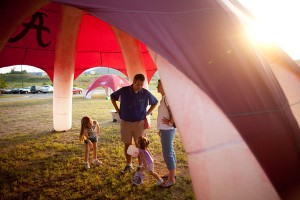 Alabaster residents Adam and Angela Mosely listen while their children, Kendall and Hanna, play under a UA tent during the pep rally. (Reporter Photo/Jon Goering)

Moore said he has been impressed with the football practices he has seen this summer, but also said Alabama will be facing tough competition this year.

“I was out watching them on Saturday afternoon, and I felt they had a good practice. They are looking very impressive,” Moore said. “But there is one thing the team lacks, and I hope you all realize that.

“We have been playing a lot of true freshmen. A lot of teams like Florida, like Auburn, like Ole Miss have been able to redshirt a lot of their players,” Moore added. “Their teams are going to be a little older, a little more mature. We are working to get to that point.”

In addition to the new seats, the facility also features new brick walkways around the stadium, new brick and wrought-iron fences on the infield, new eateries and more, he said.

“The stadium is simply beautiful. You will be very proud when you see it,” Moore said. “I hope to see all of you there for the opening game.

“I was scared the new seats wouldn’t sell out, but they did in two weeks,” Moore laughed. “I should have had more faith in our people.”

Throughout the event, the Shelby County Alumni Club raffled off a Nick Saban-autographed football and many other items. The club will use all money raised through the raffles to help send Shelby County students to the University of Alabama.

“I want to say how much I have enjoyed going around the nation to speak to different alumni groups. It’s always great to see how strong they are for the University of Alabama,” Moore added. “Thank you for everything you do for the university.”