Every year around this time, families gather at Brookwood Medical Center for a reunion of past Neonatal Intensive Care Unit (NICU) babies.

The doctors, nurses and specialists all take time out of their day to stop by and visit their previous patients.

Neonatal physicians are Dr. Vick Dicarlo, Dr. Wahib Mena and Dr. Martha Strange. When they all see the families again, it is like they are all family. They express what a joy it is to see how the once small and sick babies they helped take care of have grown.

Every family there has a very special spot in their hearts for the staff, which helped them get through those first crucial, days of their little ones life. Many of the parents recognize each other, too, and love catching up on how much the babies have changed and how big they look now. Many weighed only a few ounces last time the parents spoke.

Mom Sonya Emanuel of Wilsonville was so thankful for the care her daughter received, she named her daughter, Martha Emanuel, after Dr. Martha Strange. They still keep in touch today, almost 20 years later.

The lasting relationships many of them form are part of what makes this reunion such a special time. Parents keep in touch all year sending birthday pictures, Christmas cards, and many other photos to stay informed of each other’s lives.

“I recognized him right away from the pictures, but it is so good to see how well he is doing,” a nurse said of one of the past NICU babies, Charles.

One mom was touched when her one and a half year old, who doesn’t like anyone unfamiliar, reached for one of his old nurses who took care of him early on, wanting her to hold him.

“It was like they shared a special bond,” she said.

The gathering usually has a picnic theme with cotton candy, snacks, and cake to celebrate. They often have characters dressed up as well like Sponge Bob Square Pants.

This year they also sold T-shirts, and all the money earned went straight toward helping the NICU babies there now.

It is easy to say the friendships made are all lasting and unforgettable. 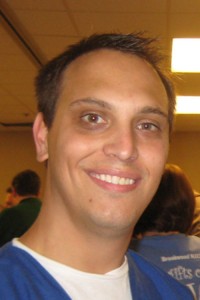 Nurse Scott is proud of one of his past NICU babies.

One stitch at a time