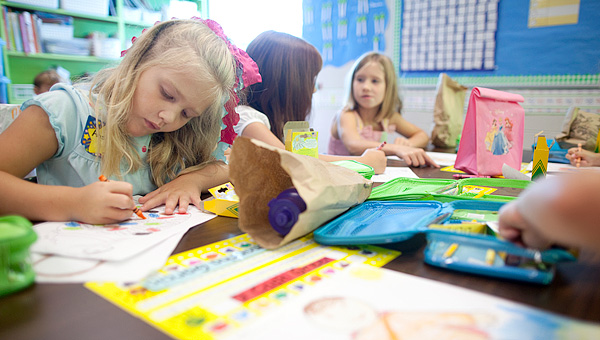 Valley Elementary first grader Ansley Cotton works dilligently on a drawing along with her classmates in Mrs. Towle's class on the first day of school August 12. (Reporter Photo/Jon Goering)

Despite a three-vehicle wreck on Interstate 65 near Valleydale Road in the early morning hours of Aug. 12, administrators at Pelham’s public schools reported a better-than-expected first day of classes.

The wreck, which involved two semi trucks and another vehicle, snarled traffic to a crawl on I-65 and caused many commuters to instead take U.S. 31 through Pelham.

But other than a handful of late students and teachers, school principals said the city experienced few hiccups during the Shelby County School District’s first day of class.

“When I got in my car this morning and heard about the wreck on the radio, I thought ‘oh no, here we go,’” Payne laughed. “But it’s been great after that. All the students have been happy to be back and eager to learn.”

Valley Elementary School on U.S. 31, which featured a new 15-classroom addition this year, was likely more affected by traffic from the interstate wreck than any other Shelby County school, said Principal Deborah Scarbrough.

“I understand there was a wreck on 65 this morning, and they rerouted traffic onto 31,” Scarbrough said. “But we had the Pelham Police out on 31 helping us by directing traffic.

“But honestly, we didn’t really have too many traffic problems this morning,” Scarbrough added. “Everything has been going smoothly.”

Riverchase Middle School Principal Charles Smith said this year marked one of the best first days he could remember.

“I’d say this is the best first day we have ever had,” said Smith, who has been at the school for 16 years. “We didn’t have a lot of parents come in this morning to register.

“If there hadn’t been an accident on 65 this morning, it would have been a perfect first day,” Smith added. “Everything has been going so smoothly it’s scary. It’s like you are almost worrying something big will go wrong, but luckily that hasn’t been the case today.”

First day of school earns A+

McKenzie Akins watches as Megan Calvert, both second graders at Helena Elementary, prepares her lunch for eating on the first... read more