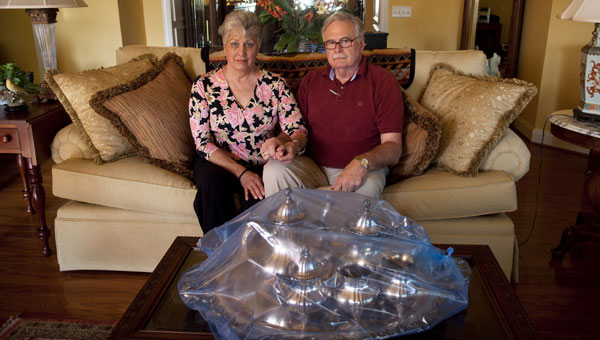 Jim and Carol Howard discovered a Chinese drywall in their home that is responsible for high levels of toxic gases in their home. In order to protect the silver, they keep it wrapped in a plastic medical bag. (Reporter Photo/Jon Goering)

Jim and Carol Howard moved into their house near Dunnavant Valley last year with intentions to settle down and retire there. Now they feel trapped in their own home, surrounded by gases being emitted  from their imported drywall, they said.

Last year they discovered their home was built with Chinese drywall, a defective sheet rock imported from China and used in the construction of many homes in 2006 and 2007.

The drywall releases hydrogen sulfide and possibly other gases, causing corrosion of wiring and appliances and possible health problems, according to the U.S. Consumer Product Safety Commission.

Carol said she first noticed something was wrong in her home when they started having problems with their air conditioner. They had the compressor and coils replaced and three months later, they had to be replaced again.

“Then shortly after that we went to a neighborhood picnic and suddenly everyone around us was talking about their air conditioners going bad,” she said. “That’s when I realized there was something really wrong here.”

Mike Henderson with Endeavor Property Services has given remediation estimates to many homeowners throughout the South who have found Chinese drywall in their home. 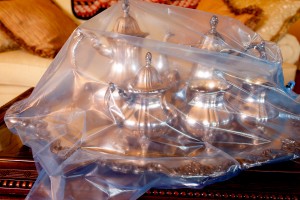 After having an inspector come out to their home, the Howards discovered their house was built with Chinese drywall.

“They went up to the attic, raked all the insulation back to look at the drywall and in big letters were the words, ‘Made in China,’” she said.

By talking to their neighbors, they found that 15 to 20 other houses in the neighborhood were also built with the drywall.

The Howards experienced all the typical first signs of Chinese drywall, including copper coils and piping turning black, electronic appliances breaking and a rotten egg smell, Carol said. Silver jewelry and her mother-in-law’s silver service have also turned black after sitting out for a week and a half.

A forensic scientist in Houston found the Chinese drywall to be emitting large amounts of hydrogen sulfide and strontium, Carol said.

“All of this is coming from the walls,” she said. “When we found out I cried my eyes out.”

The gas smell has gotten so bad that people can smell it on her clothing, she said. Some relatives refuse to visit their home anymore.

The Howards have also been chronically ill since they moved in to their home, Carol said.

“We kept getting sicker and sicker, the doctor was giving us larger doses of antibiotics and couldn’t understand why we weren’t getting better,” she said.

Carol’s asthma has worsened and she has developed skin lesions that won’t go away.

She said her house still looks like her dream home, but on the inside it has turned into a nightmare.

“It’s kind of like a person with cancer that looks great,” she said. “The house is sick and it’s making the people that live in it sick.”

The Howards and several of their neighbors have contacted lawyer Eric Hoaglund to file a lawsuit against the homes’ builder, Eddleman Properties, Inc., for installing the Chinese drywall.

However, the Howards are the second owners of their home and Alabama law prevents them from bringing claims against the original contractor.

Hoaglund said he has filed a suit against Eddleman Properties for about 10 other property owners in Shelby County.

Doug Eddleman and his attorneys did not respond to requests for an interview.

Lawsuits have also been filed against the drywall’s manufacturer, Knauf Drywall, and the distributer, Interior/Exterior Building Supply.

About 5,000 of these cases have been filed in a multi-district litigation in Louisiana under Federal Judge Eldon Fallon.

Most of the cases come from Florida, Louisiana, Virginia and Alabama near the ports where it was imported, Hoaglund said.

The only way to fix the Chinese drywall in the Howard’s home is for it be removed, tearing the house down to the studs, Carol said.

Henderson gave the couple an estimate of $89 a square foot to completely remediate their home.

“Very few people are doing that,” he said. “Only the owners of multi-million dollar houses can afford it. They don’t have the money to sink into it. Many people are losing their homes over this.”

Carol said some of her neighbors have moved out of their homes, leaving their houses empty because they couldn’t sell them due to the Chinese drywall.

“We are like sitting ducks in these houses,” she said. “We retired and put a large portion of our savings into this house and now we can’t sell it. What did we do to deserve this?”

The Howards continue to wait for help either from the builder or from the state, they said.

“It has affected our lives so enormously,” Carol said. “If you think about living in a house that looks so pretty, but no — it’s poisonous.”

For more information on Chinese drywall and its effects, visit Cpsc.gov/info/drywall.