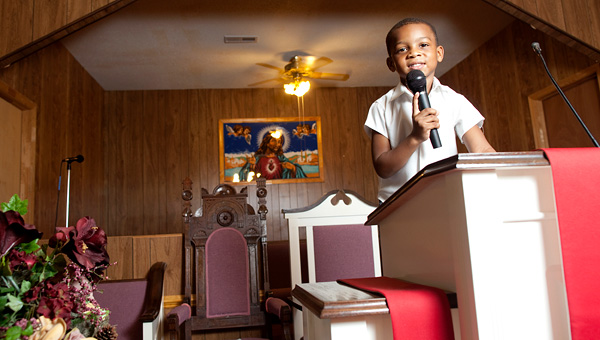 When Micah Swain was born, his grandmother held him up in the delivery room and said, “Well, he looks like a minister!”

Now four years later, that’s exactly what he’s become. Minister Micah is what he calls himself. When his mother Lashan Johnson has trouble buttoning his shirt, Micah reaches out his little hand and says, “Mama, you can do anything through Christ who gives you strength.”

Micah can now recite many Bible verses and voluntarily prays over strangers. Several Shelby County churches have invited him to speak from the pulpit.

“People tell me he’s not a typical 4-year-old,” Johnson said. “He’ll sit there and preach and he taps his foot like an old Deacon at a church. He’s 4 going on 64.”

The first Bible verse he learned was the 23rd Psalm at the age of 2, Johnson said. He now recites many others along with John 3:16 and the Lord’s Prayer. He hears other people read them and can then recite them in half an hour, Johnson said.

Micah isn’t in school yet, but already knows all his letters, numbers up to 100 and can read and spell.

“His memory is so amazing,” Johnson said. “He’ll watch the pastor at church and when we get home he’ll get his microphone and he can tell you everything the pastor said, everyone he prayed for. Some things can’t be taught.”

When he started his spiritual activities at age 2, Johnson said she thought it was a phase he would grow out of. Two years later, it’s just gotten stronger, she said.

“He’ll play with other children for a certain amount of time and then he’ll go off on his own and start praying, preaching or singing.”

He often will go up to strangers and ask to pray for them, Johnson said. Recently at a pool birthday party he prayed over a young woman. Only later did they discover that she had recently been in a bad car accident and was trying to go back to church.

“It scares me sometimes,” Johnson said. “But in a good way. It must be from God.”

She never knows quite what he’ll say or do next, Johnson said. Sometimes she’s afraid he will offend people, but they seem to take it better from a child.

“He’s just so innocent that he speaks,” she said.

Johnson said she doesn’t know what the future will hold for Minister Micah, but she knows his name means “who is like God,” and she’s sure he’ll continue to be just that.

A group of UAB science students works on a puzzle at the 4H center during a teamwork excercise August 13.... read more