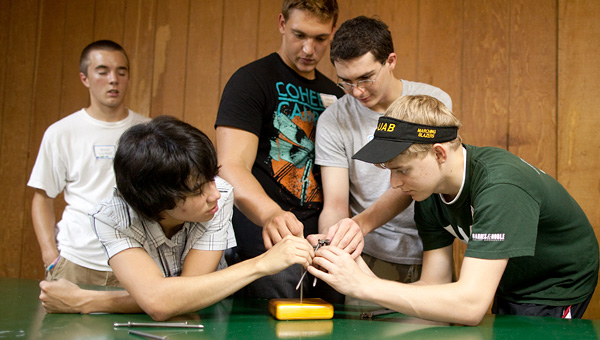 A group of UAB science students works on a puzzle at the 4H center during a teamwork excercise August 13. (Reporter Photo/Jon Goering)

Several University of Alabama at Birmingham students worked on teamwork Aug. 13 at the Alabama 4-H center in Columbiana.

About 70 UAB students in the Science and Technology Honors Program participated in the day’s activities that included a series of team-building exercises.

The day began on the low ropes course where the students participated in several activities that required them to work as a team.

“Students in this program spend a lot of time focused on studying science, math and engineering,” said Diane Tucker, director of the Science and Technology Honors Program. “We want our students to participate in the low ropes course to challenge them to take part in an activity that is outside the norm for them and at the same time, learn how to work together as a team to solve problems, which is a skill that any scientist or engineer needs to have.”

When they moved indoors because of bad weather, they were required to think outside of the box to solve many puzzles and games, said 4-H instructor Jeni Cole.

“It’s really rewarding to watch them develop throughout the day,” Cole said. “You’ll start to see some quiet ones start taking on leadership roles. It’s surprising the things that it will bring out in a group.”

Olamide Alakija, UAB biology sophomore, said he enjoyed the activities because they brought the group together.

“We all didn’t really know each other that well, but now we’re working really well together,” he said. “We’re doing a lot better than I thought we would.”

Alakija said he’s sure the friendships that were formed at the 4-H club will benefit everyone throughout the school year.

Valley Elementary first grader Ansley Cotton works dilligently on a drawing along with her classmates in Mrs. Towle's class on... read more