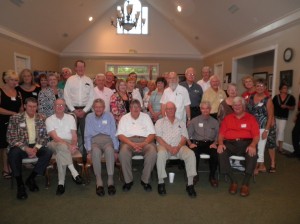 Randy McDonald of Columbiana is a walking encyclopedia of the classes that graduated from Shelby County High School from 1960-1969.

McDonald has been the driving force behind the 1960s reunions, the last being Saturday, July 10, at Magnolia Meadows.

McDonald has been managing his classmates since eighth grade. The legendary Coach Don Bulger made McDonald an offer he could not refuse. Mike Hill had been SCHS team manager and wanted to become a player. Bulger asked McDonald to take his place, but only if he could keep his grades up.

McDonald said that was a turning point in his life. He became the basketball and football managers through some glory years at SCHS.

“I know I would not have graduated from high school had it not been for Coach and his wife,” said McDonald. “Coach and Miss Pat helped me with my schoolwork and took me under their wing.”

In February 1983, Bulger tragically died after a boating accident. The classmates who attended his funeral made a commitment to keep in touch and the reunions began every five years. McDonald was chosen to be the manager once again for his classmates, now as their Reunion Chairman.

Conrad Fowler was president of the Student Council and a talented athlete.

“The highlight of my high school years was being a member of the basketball and football teams,” said Fowler. “In basketball, we went to the semi-finals at the state tournament. In football we never lost, winning 44 games over four seasons.”

Betty Boones Wade loved her days in the band.

Dr. Bob Mullins was president of the Student Council. His fondest memory was assemblies.

“The seniors always led out, then seventh through 10th grades, and last, the juniors.” said Mullins. “I loved that the juniors were always last.”

Mullins and Joan Strickland Hanson were voted Best All Around.

“I remember the wonderful teachers who prepared me so well for college,” said Watkins.

The reunion was such a success that a vote was taken and the reunions will now be every three years, not five.