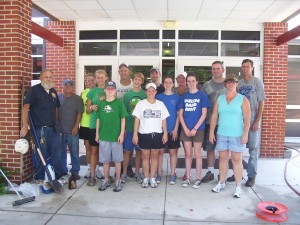 When William “Bill” Harper first came to Chelsea as middle school principal five years ago, he called for a community clean-up day at the school.

“And every year since then, there has been a clean-up day,” he said. “But parents have put it together without my mentioning it.”

On Saturday before the new school year began, a group of men, women and youth worked at the school for the greater part of the day. They cut grass, weeded shrubbery and beds, hosed down sidewalks, cleared away leaves, made minor repairs, and took care of other concerns.

Harper said ever since he has been at Chelsea, parents and community people have been good to help out wherever they can.

Middle school students Abby and Katie Clark were found pulling weeds and vines in the courtyard between buildings, making it a more pleasant place for enjoying fresh air and sunshine, renewing old friendships and making new friends during the school year.

“The courtyard is nice,” Harper said, “But it takes a lot of work.”

Most of the people working were either Liberty Baptist Church members or members of the Parent Teacher Organization, said PTO President Candy Shaw.

Between work projects, Russ Roberts made photographs for Liberty’s mission table. “We want people to see that there are ministries out there in the community that they can do,” he said.