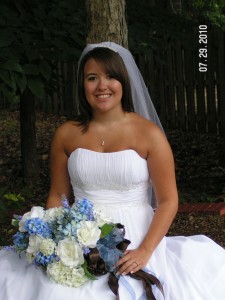 Mr. and Mrs. Clarke and Tracy Allen of Alabaster are proud to announce the marriage of their daughter, Kayla, to Mr. Brian Carstensen of Hoover.

Brian is the son of Mr. and Mrs. Paul and Suzy Carstensen, also of Hoover.

Kayla wore a white, strapless gown with a long, beaded train and carried white roses, blue hydrangeas and delphinium in her bouquet. The wedding took place outdoors on Aug. 7 at the Brignoli Manor and Gardens in Talladega at 5:30 p.m with a reception following.