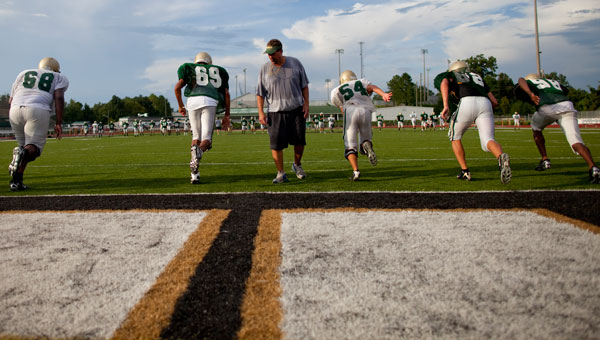 Pelham High School football coach Brett Burnett directs sprinting drills during an Aug. 17 practice at Ned Bearden Stadium. Burnett is looking for leadership from many of his young players.

Keeping players healthy and injury-free could lead to big things for the Pelham High School football team this year, according to PHS head coach Brett Burnett.

Despite losing four Division I signees following last year’s 3-8 season, the Panthers are looking to field a tough team anchored by of a core group of returning players.

Burnett and his staff have spent the offseason working to strengthen the experienced players while giving several younger players experience in their new roles.

“We’ve got a good group of guys coming back this year,” Burnett said. “But we’ve got to get some of our young guys grown up fast so they can fill the roles we need them to this year.

“We’ve got a lot of young kids in some key spots this year, so we are going to be looking to them a lot,” Burnett added.

Bringing the young players up-to-speed and keeping the team healthy will go a long way toward helping the Panthers compete in what is usually one of Alabama’s most competitive regions, Burnett said. 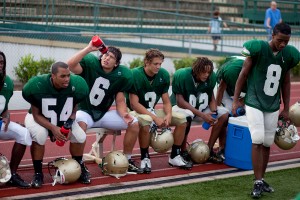 Members of the Pelham High defense take a rest after running drills during a practice on August 17. (Reporter Photo/Jon Goering)

“I am feeling really good about this year and the things we have accomplished during the offseason,” Burnett said. “If we can stay healthy and work as a team, I think we will have a successful year.”

Last year, Pelham made it into the first round of the Class 6A playoffs by winning some key games in Region 6. Burnett said he is preparing his team to keep the same week-by-week mindset this year.

“Every Friday night is a battle. We have been getting better out here every day,” Burnett said. “But staying healthy is a huge key to our success this year.”

The Panthers are riding a wave of momentum into the 2010 season after defeating Bessemer City High School, who knocked Pelham out of the playoffs last year, 13-0 in the teams’ spring scrimmage in May.

This year, Pelham faces a schedule similar to last year’s, with games against traditional powerhouses like Hoover, Vestavia Hills and Spain Park.

“I think we have made some pretty good strides since last year,” Burnett said. “We just have to continue to work hard and improve.

“If everything gels together this year, I think we will be very successful,” Burnett added.

Queens of the Court