Queens of the Court 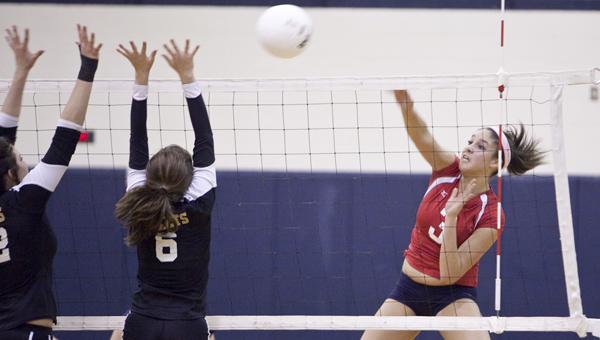 Skinner, who has made a verbal commitment to the University of Alabama, tops the list of the best high school volleyball players in Shelby County this season. Skinner led Oak Mountain with 498 kills as a junior.

Montevallo High School senior outside hitter Amber Cardwell will try to lead the Bulldogs to the AHSAA Class 3A Elite Eight.

Briarwood Christian School senior outside hitter Kate Carter will attempt to lead the Lions to an AHSAA Class 5A title.

These five players hope to rule the volleyball court during the 2010 season. Each of their teams have dreams of a state championship with them leading the way.

Outlook: The Yellow Jackets should be in the mix for an area title with eight varsity letterwinners returning. Vincent will look to an experienced group of five juniors for leadership.

Outlook: The Bulldogs, who will also rely on a large group of juniors, are back under the leadership of Niven. Montevallo hopes to make a run at the Elite Eight with seven upperclassmen leading the way.

Outlook: Indian Springs features 12 upperclassmen in Tetzlaff’s first season. Indian Springs should be in the running for a playoff spot with an experienced squad.

Outlook: Calera had a record season in Lewis’ first season as coach. The Eagles will likely make a run at the Elite Eight this season with a core group of four upperclassmen returning.

Outlook: Despite the loss of a talented group of players to graduation, the Lions should remain an elite team with Le taking over the program. Briarwood will need leadership from three seniors who played a key role last season.

Outlook: The Hornets flashed plenty of potential last season. Chelsea hopes to be in the race for a playoff spot again in Gill’s first season at the helm with six players with varsity experience returning.

Outlook: Shelby County will feature plenty of rookies this season. The Wildcats’ youth will be tested with only one senior on the roster.

Outlook: After a return to the Elite Eight last season, the Eagles hope to compete for a state championship in Richardson’s second season. Oak Mountain is in good shape with six letterwinners returning, including three senior starters.

Outlook: The Panthers must replace a talented group of players lost to graduation in O’Quinn’s first season with the varsity. Pelham will be a young team with only four letterwinners returning.

Outlook: The Jaguars should be a much improved squad with the return of 10 varsity letterwinners, including six seniors. Spain Park should make a run at an area championship this season.

Outlook: The Warriors could also be a surprise team this season. Thompson, which features nine upperclassmen on its 10-man roster, could be in the mix for an area championship.

Outlook: The Lions are always a contender for an AISA championship. This season shouldn’t be any different with eight letterwinners returning and Jones in charge.

Outlook: The Chargers should be much improved with eight of their nine players having previous varsity experience. Cornerstone could be a surprise team this season.

Outlook: The Eagles are in good shape with the return of two seniors and six juniors who lettered last season. Hope could be the ACSC championship game opponent for Evangel.

Montevallo High School will have a memorial for former coach Richard Gilliam on Aug. 27 before the Bulldogs’ season-opening contest... read more