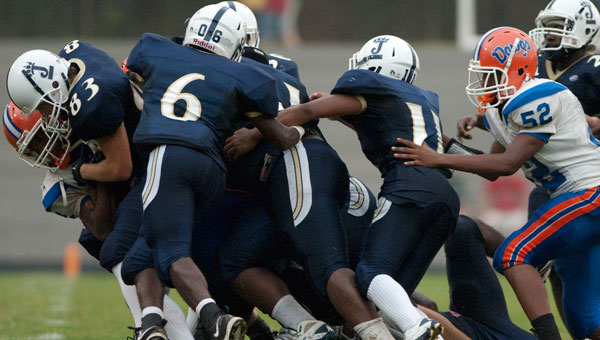 A swarm of Panthers work to bring down a Montevallo ball carrier during the Bulldogs' preseason jamboree Aug. 19 at Jemison High School. (Reporter Photo/Jon Goering)

JEMISON – It may have only been a decorated scrimmage, but Jemison’s rushing attack had the looks of being in midseason form.

The Panthers racked up 233 rushing yards and rolled over Montevallo, 34-7, in Bulldogs coach Jamie Williams’ jamboree debut at Panther Stadium on Aug. 19.

Running back Javae Swindle led the way for the Panthers’ ground game, finishing with 94 yards on eight carries and one touchdown. 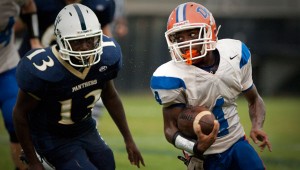 Montevallo junior R.J. Scaife runs away from a Jemison defender in the Bulldogs' 34-7 loss in a preseason jamboree Aug. 19. (Reporter Photo/Jon Goering)

Fellow tailbacks Trahe Smith, Isa Bentley and Dustin McDaniel added to the attack, combining for 139 yards on the ground.

“We were just flat,” Williams said. “(Jemison’s) got a heck of a team, and they just took it right at us.”

Bentley set the tone on the opening possession of the game. On the fourth play from scrimmage, Bentley took the handoff off the right side and raced 39 yards to give Jemison a 6-0 lead with 10:55 left in the first quarter. The touchdown run capped a 4-play, 65-play drive.

Montevallo looked poised to draw even on its opening drive, as the Bulldogs drove the ball to the Panther 1-yard line in four plays. On third-and-goal, however, the snap sailed over quarterback R.J. Scaife’s head, resulting in a turnover.

Another touchdown run – this time by Swindle – combined with a 2-yard Scott Clements touchdown pass  with 2:10 left in the second frame increased the lead to 20-0 at the half.

The Bulldogs avoided the shutout when Scaife took a direct snap on fourth-and-goal and dove over the goal line for a 1-yard scoring plunge with the clock showing 59 seconds remaining in the third quarter.

Williams said his team has big strides to make before next week’s season opener at home against Calera.

“We’ve put a premium on blocking and tackling so we’ve got to go back to the basics,” Williams said. “Some of those things are fixable, and we’ve got to get them fixed.”

Jemison also plays its first game of the season next week. The Panthers will travel to Chilton County Aug. 26.