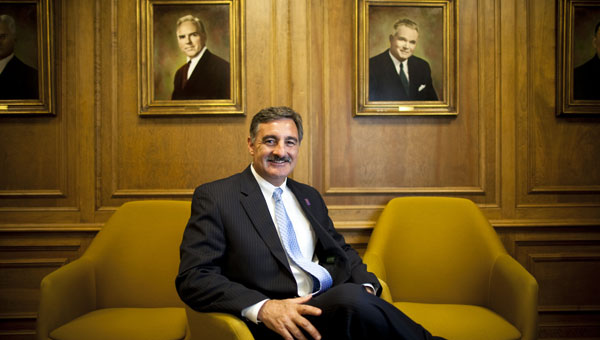 Dr. John Stewart will be inagurated as the University of Montevallo's 15th president Oct. 14.

There’s a new man on campus at the University of Montevallo this fall and he’s bringing a mixed bag of experience to the table.

Stewart comes from St. Augustine, Fla., where he most recently worked as the vice president of institutional advancement at Flagler College. He was born in a small town in Delaware and obtained his Bachelor’s degree in history from Wake Forest University.

While working as a pipeline contractor, Stewart took evening classes to get his master’s degree in English literature and later his doctorate.

“I really wanted to be an English professor,” Stewart said. “But I saw that there was an opportunity to serve students through fundraising and marketing of the university as well as teaching.”

Stewart’s strong background in fundraising and marketing began while working on his son’s behalf.

Stewart’s son, Ian, now 19, had an adverse reaction to a childhood vaccine that left him deaf. Ian was attending a special school, when the family lived in Mississippi, that didn’t have enough space for incoming students.

“There was a very small building and about 100 children were on the waiting list,” Stewart said. “Some community members and I didn’t think that was right, so I helped them raise money before I got into the fundraising business.”

Stewart’s idea was to build a new building for the school, allowing them to have more space for students. As a volunteer, he helped the school raise the required funds and saw the new building come to fruition.

“That was exciting just to be a little part of that,” Stewart said. “So I saw the potential of fundraising for education.”

Stewart has spent the last 11 years working in fundraising and development including some large accomplishments during his time at Flagler College. He increased the total fundraising from $1.3 million to $22 million in his first two years and secured the largest gift in the history of the college.

Stewart said he’s excited about the potential at the University of Montevallo and plans to use his experience to extend the reach and reputation of the college.

“I believe we have one of the best academic values in the country,” Stewart said. “I deeply believe we provide an ivy-style education for a public university cost. What’s most exciting for me is to carry out that very unique, very special mission of educating students while delivering this incredible product at an unbelievable value.”

Plans for the future

Stewart arrived on campus in the aftermath of the controversial resignation of the university’s 14th president, Dr. Phillip C. Williams. Williams resigned in November 2009 and still has many supporters on the campus and in the community.

Stewart is sensitive to feelings that may have been hurt during the transition of presidents, he said.

“Even long-lived secure, loving families occasionally have differences,” Stewart said. “Like a solid family, our community will heal and honor those who have served our students and continue to serve our students well and efficaciously. We’re grateful for all those who have worked on our university’s behalf in the past and at the same time are excited about our future.”

During his time at UM, Stewart plans to focus on students’ needs and concerns. Already this summer, Stewart has addressed student concerns including lighting on campus, the extension of food service hours and the addition of coffee and food services in the library.

He said he hopes his relationship with the students will be ongoing.

“I hope to start on check-in in day by helping them unpack and remain in constant contact with them the whole school year,” he said. “There will be a president’s hour every week on campus in which I will have an open door. I plan to meet with all the student groups this fall to have the benefit of their counsel concerning our opportunities and also to make sure that I fully appreciate what they see as our strength and weaknesses.“

In the coming years, Stewart said he plans to focus on brining more students to the university, enhancing academic programs, maintenance on older buildings and looking externally for financial resources.

“We’re going to deal flexibly with diminishing support from the state of Alabama by operating a little more like a private school,” Stewart said. “We already do academics like an elite private school, now we need to increase revenue sources from areas that lie outside public support.”

Stewart also plans to remain strong economic partners with the city of Montevallo and Shelby County.

He and his wife Jennifer have already been active in meeting with members of the community concerning economic development opportunities, he said.

“It’s really wonderful to have a partner in this endeavor with my wife, who has really been supportive and has really dived in herself.”

When Stewart isn’t running the university, he can be found spending time with his wife, his two daughters, son and stepson.

His son Ian will start as a freshman at the university this fall.

Classes begin Aug. 30 and Stewart said he couldn’t be more excited to start his journey at Montevallo.

“I’m really just excited to be part of the family and astounded at how our graduates and students are transforming the world.“