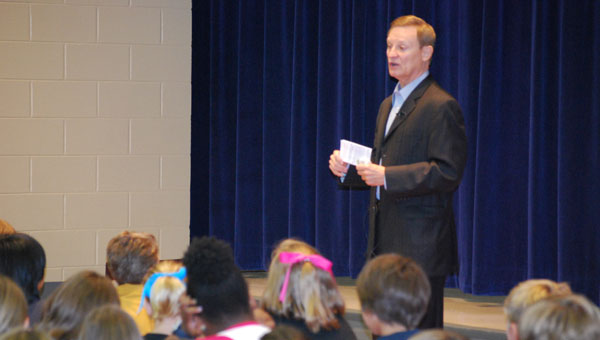 U.S. Rep. Spencer Brachus speaks to a group of fourth and fifth graders at Greystone Elementary.

About 250 fourth and fifth graders got an insider’s perspective on the U.S. government Aug. 20 at Greystone Elementary.

U.S. Rep. Spencer Bachus, R-Ala., spoke to the group from the stage in the school’s cafeteria and addressed everything from the branches of government to the weather in Washington D.C.

Bachus said the main lesson he wanted to impart to the students is that the government is run by the people and for the people.

“I want them to know that it’s their country, their capitol,” Bachus said. “That the president isn’t in charge, that they can influence what goes on. One day, any one of them could be president or a congressman.”

Bachus discussed with the students the different roles of congressmen, senators and the president and how each of them are elected.

Bachus brought copies of the Constitution to pass out the students and encouraged them all to learn their rights and get involved with the government.

“There are a lot of things about this country that you might want to change,” he told the students.

He also emphasized the change women are making in the nation’s capitol right now.

“The biggest change in Congress lately is the number of women,” Bachus said. “In fact, they’re calling this year the ‘year of the woman’. More women will serve in the Senate this year than ever before.”

A young girl in the audience asked, “Can a woman be president?”

Bachus responded, “Absolutely. I’m surprised one hasn’t already been. They’ve come very close. You might be president. If you study hard, you’ve got a good shot at it.”

Other students asked about the difficulty of his job, his favorite part of being a congressman and what his favorite subjects were in school. Bachus said he was very impressed with their questions.

“They’re just fun to be around,” Bachus said. “They are so interested in what’s going on. It’s just fascinating to hear the questions that they ask.”

Before he left, Bachus encouraged the students to work hard and always keep learning.

Paul Boyd uses his wheelchair to get around on the University of Montevallo campus. Right now he can only make... read more