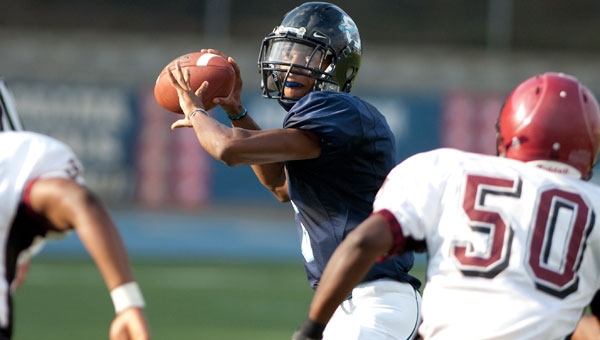 VESTAVIA HILLS — Calera put 20 points on the scoreboard, but it wasn’t enough as the Eagles fell to Shades Valley, 28-20, in the first of three preseason jamborees at Vestavia Hills High School’s Thompson Reynolds Stadium on Friday night.

Calera senior quarterback Brandon Wells showed why he’s considered one of the best players in Shelby County, piling up 236 yards through the air on 16-of-24 passing with two touchdowns in defeat.

“I thought we came out a little bit sluggish on the defensive side of the ball right off the bat,” Calera coach Scott Martin said. “I’m excited the way (the players) finished the game and played hard until the very end.”

After falling in an early 7-0 hole following a 41-yard touchdown run by the Mounties’ Jordan Howard, Calera answered on its next possession.

The Eagles drove the ball to the Shades Valley 19-yard line in five plays. On the sixth play of the drive, Wells tossed the ball out to the left on a jailbreak screen to wide receiver Ronnie Clark, who went virtually untouched on his way to the end zone with 7:33 remaining in the first quarter. 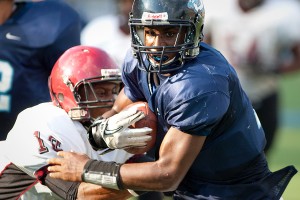 Shades Valley responded with touchdowns on its next two possessions — a 9-yard David Johnson scamper and a 29-yard Johnson run — to push the lead to 21-6 with 9:16 left in the second quarter.

The Eagles cut into the deficit on their next possession, as Wells connected with Clark again for a 7-yard touchdown with 5:14 left to bring Calera within nine points after a missed extra point.

The momentum was short-lived as Shades Valley’s James Rivers Jr. took the ensuing kickoff — retreating to catch the ball over his shoulder — and returned it 75 yards for a touchdown, leaving defenders in the dust down the left sideline.

Calera, however, had no answer for the Mounties’ running game, which churned out 155 yards and three touchdowns on the night. 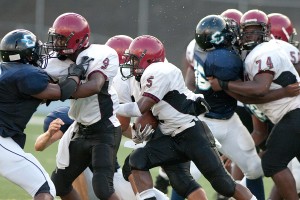 The Eagle defense struggled to contain the Shades Valley rushing attack giving up 155 yards in the scrimmage.

“We’ve got to do a better job inside (on the defensive line), and we’ll get better at that,” Martin said. “We didn’t adjust very well across the front.”

Calera will kick off the season on the road at Montevallo Aug. 27.

Hillcrest players watch from the sideline as Thompson senior running back Chris Cooper breaks away for a long run in... read more