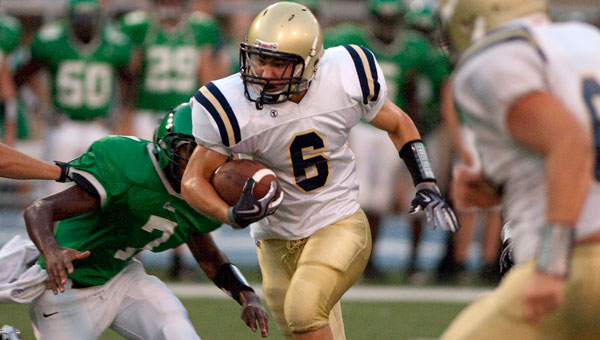 On Friday night, the competitors vying for the job — Ben Craft, Tanner Cunningham and Jon Stapleton — got one last shot to show head coach Fred Yancey why he should be the guy under center for the Lions in 2010.

The three quarterbacks combined for three touchdowns in the Lions’ 21-0 victory over John Carroll in their three-quarter jamboree at Vestavia Hills High School’s Thompson Reynolds Stadium.

“I was tickled that our kids came out and looked pretty decent,” Yancey said.

Craft, who threw for 91 yards and two touchdowns on 7-of-11 passing in one half of play, opened the game as the starter and did nothing to hurt his chances of winning the job.

The junior signal caller marched the offense 80 yards on 9 plays — completing four passes on the drive — for a score on the Lions’ opening possession.

Craft capped the drive with a 20-yard touchdown strike to wide receiver Daniel Robert, who leaped over a Cavalier defender to haul in the pass near the back of the end zone.

After halting two Cavalier drives, the Briarwood offense went back to work from the John Carroll 35-yard line under the command of Craft. 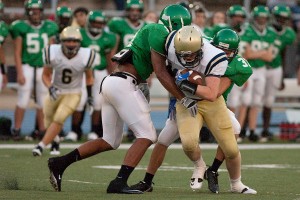 After a 16-yard completion and a 1-yard run by Cole Pearson, Craft found Keeton Russell over the middle for an 18-yard touchdown with 1:11 left in the second quarter.

Although the regular season is just a week away, Craft said he isn’t letting the pressure get to him.

“I did what my coaches asked me to do and what my teammates expected me to do,” Craft said. “I can’t say I focused on (earning the starting job) one bit tonight.”

Craft was relieved by Cunningham at the start of the second half. The sophomore went 6-for-10 for 55 yards and one touchdown while also leading the offense to its lone score of the second half — a 7-yard connection with senior wideout Turner Herron late in the second frame.

Stapleton had no completions on two attempts in limited action.

Yancey said his quarterbacks gave him something to think about.

“We’re going to look at the tape, get together and make a decision later,” he said.

The Lions open the season Aug. 27 at home against Demopolis.