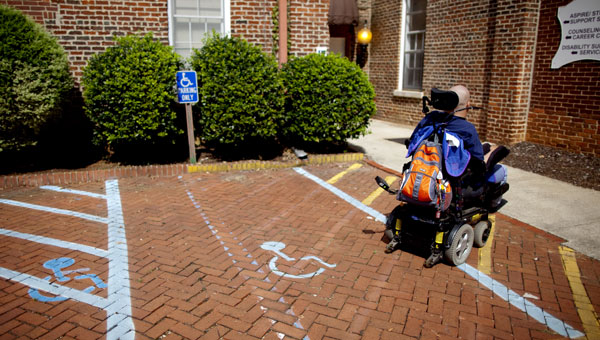 Paul Boyd uses his wheelchair to get around on the University of Montevallo campus. Right now he can only make it to Montevallo about once a week. (Reporter Photos/Jon Goering)

When 34-year-old Paul Boyd imagined going to graduate school at the University of Montevallo this fall, he pictured himself living near campus and commuting to classes in his wheelchair.

Boyd, a quadriplegic since an accident in 1995, has not yet realized that dream and is instead living 12 miles away in an Alabaster nursing home where he is one of the youngest resident.

His graduate classes begin Aug. 30, leaving Boyd in a race against time to receive the funding he needs from Alabama Medicaid to move to Montevallo.

The problem is state Medicaid will not pay for him to live independently, Boyd said. Medicaid currently pays for his housing in the Chandler Health and Rehabilitation Center, where he receives around-the-clock care.

To live independently in Montevallo, he will need at least 10 hours a day of nursing care, someone to help him get out of bed, bathe, dress and eat. 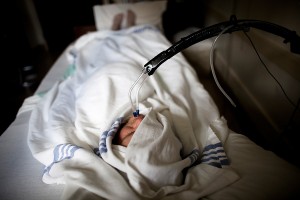 Paul waits in his bed at the nursing home until a nurse is available help him wash, get dressed and get into his chair.

Steve Gold, a lawyer out of Philadelphia, is working with James Tucker and Lonnie Williams from Alabama Disabilities Advocacy Program to take on Boyd’s case against Medicaid. Gold was the lawyer involved in the 1999 U.S. Supreme Court decision known as the Olmstead ruling, which ruled against the unnecessary institutionalization of the disabled.

“His case represents a bigger issue that our state needs to come to terms with,” Tucker said. “Generally, if people can be served in their home instead of a nursing home, they should be.”

For many people in Boyd’s situation, it’s actually cheaper for the state to provide in-home care than it is to continue to pay nursing home expenses, Tucker said.

With Aug. 30 just around the corner, Boyd is afraid he won’t be able to move out of the nursing home before classes start. This creates the problem of transportation for the 20-minute commute to Montevallo. Boyd owns a van that is accessible for him, but he can’t drive it. 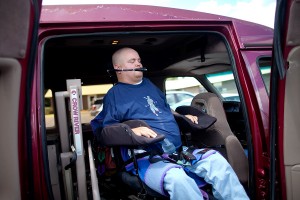 Although Paul owns a van, he needs to find someone who can help him get loaded into it and drive it to Montevallo in order to attend his classes from the nursing home once they start Aug. 30.

“This is the bind I’m in,” he said. “I don’t know who’s going to be in my classes. So I’ve got a ride to go to class that first day and I hope that someone in the class commutes and wouldn’t mind giving me a ride. If I don’t get that then I may have to drop classes and wait till next year and start over.”

Boyd will be studying community counseling, he said. After obtaining his Bachelor’s degree in English, he realized what he really wanted to do was help other people who have been disabled through traumatic injuries.

“I was having a surgery done on a pressure wound about a year and half ago at Spain Rehab and met a young girl who was 21 and was newly injured,” he said. “I would go talk to her everyday and it made me realize, ‘Maybe this is what I need to be doing.’”

Boyd has also spent time going to local elementary schools to talk to students about how people with disabilities are just like everybody else.

Despite the distance, Boyd still tries to make it to Montevallo several times a week to visit with his friends and family. He can often be found in Eclipse Coffee & Books laughing and hanging out with friends. 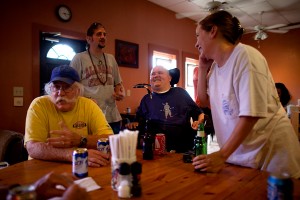 Paul jokes around with his friends at Eclipse in Montevallo.

“If I don’t get out of here to get down there at least once a week, I feel like the walls are caving in on me,” he said. “That is a treat. It’s something that I don’t take for granted.”

Boyd’s case against Medicaid is still in litigation, so for now he remains living in the nursing home. Every morning when he wakes up, he presses a call button with his mouth and waits for a nurse to get him out of bed.

He spends his days keeping up with friends on Facebook and interacting with the nurses and other administrators in the nursing home.

His case was filed in Montgomery the second week in August, Tucker said. If they cannot come to an agreement with Medicaid, the case will likely have to be settled in court. Tucker said there’s no way to know how long the process might take.

Alabama Medicaid did not respond to attempts to get their comments on this case.

Although he’s not sure if he’ll ever get to move back to Montevallo, Boyd keeps a positive attitude and refuses to give up.

“There are a lot of people that quit, that stay in bed and never get up,” Boyd said. “That’s just not me. There’s a deep depression that goes along with having severe injuries and I’m just not that type of person. I probably went through it soon after my injury, but I had a family and a community that kept me from being that way. I’m apart from that community now and I want to get back.”

A swarm of Panthers work to bring down a Montevallo ball carrier during the Bulldogs' preseason jamboree Aug. 19 at... read more