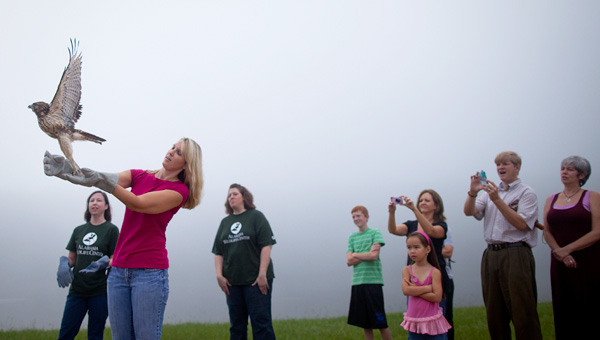 EBSCO employee Kim Wester releases one of the red-shouldered hawks into the wild on August 20, while Alabama Wildlife Center workers Lee McDonald and Beth Bloomfield join a group of spectators to watch. (Reporter Photo/Jon Goering)

NORTH SHELBY — As Alabama Wildlife Center employee Lee McDonald took the first red-shouldered hawk out of its box Aug. 20, the crowd gasped. The hawk turned, fixing its eye on the crowd, as McDonald said, “You guys ready to watch this guy?”

The crowd responded with a “yeah!” as McDonald released the hawk, then cheered as the bird flew into the morning fog among the trees, back where it belongs.

Employees and volunteers at the Alabama Wildlife Center have been working since late spring to save and raise three young red-shouldered hawks.

Since they were brought to the center, the hawks have spent most of their time outdoors, getting ready for the day they would be released, McDonald said.

The hawks were released on EBSCO Industries wooded property in North Shelby, with EBSCO employees and home school families on hand to watch.

“This is the best part of rehabilitation, when we’ve raised these babies and get to see them on their maiden voyage into the wild,” McDonald said.

Each of the three hawks was safely released, although not without slight complications.

Kim Wester, an onlooker in the crowd, was invited to release the second hawk. When she took hold of the hawk, it got upset and attempted to get away. McDonald was able to help calm it down, however, and Wester’s second try was successful.

“It’s just amazing. It’s a once in a lifetime thing,” Wester said of her experience. “I’m a huge lover of nature, so it was an honor.”

After all the hawks were released, Alabama Wildlife Center Beth Bloomfield said the day had been a major success.

“We’re not in this for the paycheck. It’s moments like this that pay us,” Bloomfield said. “These birds require hours and hours of service. It’s lots of effort for more than 12 weeks.”

She said watching the hawks fly away made the day seem bright, even with the gray fog and sprinkling rain.

“You literally feel your heart going up with them,” Bloomfield said. “You feel like all is right with the world.”

For more information on the Alabama Wildlife Center in Pelham, visit Awrc.org.

A swarm of Panthers work to bring down a Montevallo ball carrier during the Bulldogs' preseason jamboree Aug. 19 at... read more