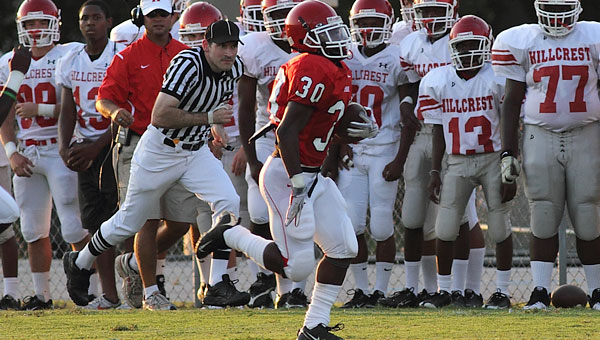 Hillcrest players watch from the sideline as Thompson senior running back Chris Cooper breaks away for a long run in a 7-7 jamboree tie between the two teams at Larry Simmons Stadium. (Contributed/Jimmy Mitchell)

His offense didn’t waste any time putting the Hillcrest-Tuscaloosa defense on red alert in a 7-7 tie in a preseason football jamboree Aug. 20 at Larry Simmons Stadium.

The Warriors had the Hillcrest defense scrambling on the fourth play from the line of scrimmage with rookie sophomore quarterback Trey Matherson finding senior wide receiver Tresman Gaddis open down the middle of the field for a 47-yard touchdown.

Junior kicker Matt Nall added the extra point to give the Warriors a 7-0 lead early in the first quarter.

“We’ve got a young quarterback,” Hill said. “I’m glad that play happened. That gave him so much confidence going into next week.”

Matherson finished the three-quarter varsity scrimmage 3-of-11 for 53 passing yards with a touchdown and an interception. Senior running back Chris Cooper rushed for 89 yards on 10 carries. Gaddis finished with two catches for 48 yards. 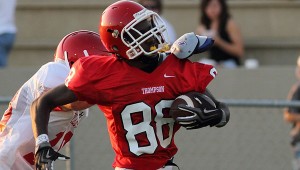 Thompson finished with 139 rushing yards and 81 passing yards for a total of 220 yards on offense in the varsity portion of the jamboree.

The defense also shined in the jamboree. The Warriors gave up a touchdown reception in the second quarter, but Thompson came up huge on another possession with a defensive stop on a fourth-and-1.

Senior linebackers Adam McKenzie and Brandon King led the charge as they wrapped up the Hillcrest ball carrier behind the line of scrimmage.

“The defense started out slow, but they picked up the pace,” Hill said. “We’ve got some leaders on defense. The thing tonight is when we got down, we got back up. We haven’t seen that in the past.”

Thompson opens the 2010 season Aug. 27 at home against Stanhope Elmore. Kickoff is set for 7 p.m.

Hill said he is pleased with where the Warriors are entering the first week of the regular season.

“Tonight was encouraging,” Hill said. “We had a misalignment and linemen down field on one play. Those things are correctable. I was pleased with our effort.”

Dee Tolbert scored a rushing touchdown in the junior varsity segment of the jamboree as the Warriors and Patriots scored once each.