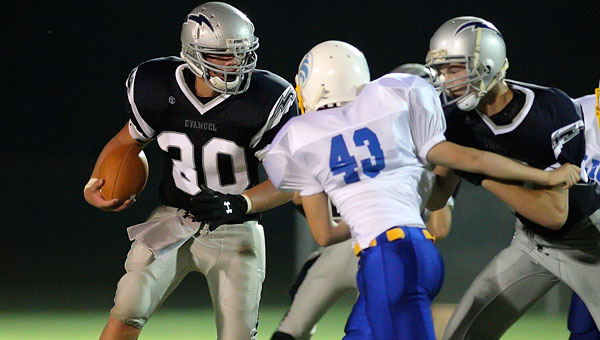 Senior running back Josh Flanders led Evangel (1-0) with three touchdowns in the game. Flanders scored his first touchdown on a 35-yard run in the first quarter.

Junior tight end Aaron Walker added the two-point conversion on a pass from junior quarterback Hayden Brown to put the Lightning up 8-0 with 4:23 remaining in the first quarter.

Following an interception by junior defensive back Brantley Wells, senior running back Michael Entrekin pushed the lead to 14-0 four players later with his 24-yard touchdown run late in the first quarter.

After a touchdown by GACS, Evangel added a rushing touchdown to push the lead to 20-6 late in the second quarter. Evangel capped a 41-yard drive with a 2-yard touchdown run by Flanders.

Flanders scored his final touchdown of the game on a 7-yard run with 10:18 remaining in the game.

Following an interception by Walker, the Lightning scored their final touchdown of the night on a 4-yard run by Brown to push the margin to 32-6 with 4:58 remaining in the game.

Evangel will host Franklin Christian School in its next game Aug. 27.