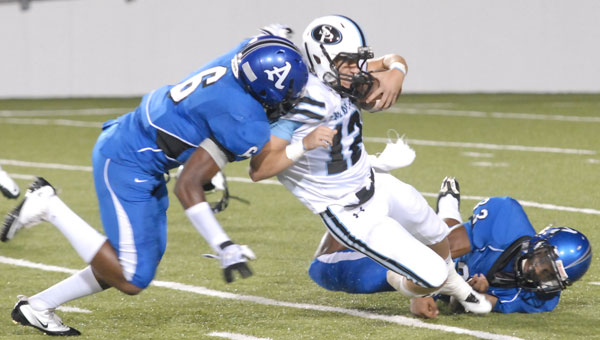 Spain Park High School junior quarterback Reid Reinagel is sacked by an Auburn defender Aug. 21 in the first half of the Jaguars' 30-3 loss to the Tigers in the 2010 Alabama High School Athletic Association Champions Challenge at the Cramton Bowl in Montgomery. (Contributed/Kristi Ingram)

With only five senior starters on the field in the Jaguars’ exhibition season opener Aug. 21 against Auburn in the 2010 Alabama High School Athletic Association Champions Challenge at the Cramton Bowl in Montgomery, Shores saw a team that closely resembled his squad last season.

The only problem was the group that reminded him of last season’s team was the Auburn Tigers.

Auburn dominated the line of scrimmage offensively and defensively on its way to a 30-3 win over the Jaguars.

“It looked like a bunch of men playing against boys out there,” Shores said.

The Tigers jumped out to a 23-0 lead at halftime with two rushing touchdowns, an interception returned for a touchdown and a field goal.

Meanwhile, the Jaguars struggled to move the ball. Spain Park racked up only 12 yards offensively on 25 plays from the line of scrimmage with one first down in the first half.

Auburn added another rushing touchdown early in the third quarter to push the lead to 30-0 before the Jaguars put together their first lengthy drive of the game.

Junior kicker Jake Hoffman capped a 14-play, 76-yard scoring drive with a 21-yard field goal with 9:40 remaining in the game.

Spain Park racked up 86 total yards on offense with five first downs in the second half. The Jaguars finished with 111 yards of total offense.

Reinagel, who was sacked three times in the first half, completed 2-of-5 passes for 18 yards with an interception.

Silvio led the Jaguars with 32 yards on two carries. Roberson rushed for 28 yards on 12 carries and McMillan added 27 yards on eight carries.

Spain Park played without running back Ashton Daniel, who suffered a torn anterior cruciate ligament during practice Aug. 18, and defensive lineman Emmanuel Cooper, who sat out the exhibition contest with a sprained ankle.

Shores said the youthful Jaguars will need to take lessons learned in the exhibition contest and apply them quickly before the regular season begins.

“We’ve got a bunch of young guys out there,” Shores said. “We’re just hoping to get better.”

The Jaguars open the 2010 season Aug. 28 against Grayson (Ga.) at North Gwinnett High School in Gwinnett, Ga. Kickoff is set for 4 p.m.

Prior to the contest, Spain Park assistant coach Kenneth Hand, whose son Army Specialist Andrew Hand was killed July 24 while serving in Afghanistan, was presented a special letter of condolence from Major General Donald Campbell Jr. of the U.S. Army Recruiting Command at Fort Knox, Ky. The letter was presented by Lt. Col. Kevyn Bryant at the 50-yard line as both teams stood lining each 40 yard line at Cramton Bowl.