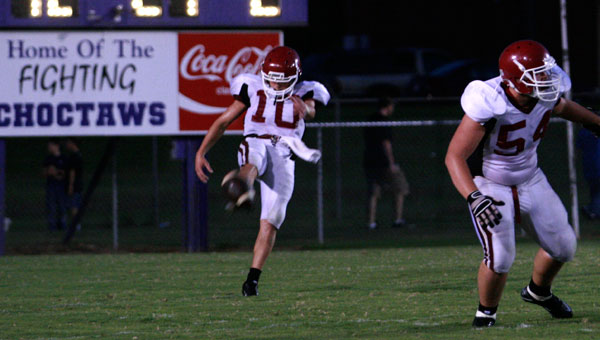 For a team that touted a slew of seniors just a year ago, the loss to the Choctaws was overlooked as the learning experience was priceless to the young Wildcat team.

“This game tonight was a great way to end our jamboree season and prepare us for the games ahead,” said Shelby County coach Ryan Herring. “We played Vestavia in the spring and a strong Bibb team tonight. This is what we needed to build upon and get better.”

Offensively, the Wildcats still possessed the running game that has garnered so much success in previous years. Only attempting one pass, the Wildcats were able to move the football against the over-sized Choctaw defense.

However, two fumbles stopped one drive deep into enemy territory while another gave excellent field position for the home team.

The Wildcats chalked up two scores with a 27-yard scoring run by Denzel Williams and a quarterback sneak by Ty Proctor.

The Wildcats’ defensive unit held their own against the power Choctaw running game in spurts, but succumbed to four long touchdown runs and one from the 4-yard line before the final horn sounded.

“We would move the ball well and then shoot ourselves in the foot,” Herring said.  “I thought we did some good things on both sides of the ball tonight, but also saw some things we’ll need to work on.”

“If we can keep from beating ourselves, we’ll have a chance to win some games.”

Shelby County will host Pell City in the 2010 season opener Aug. 27 at Papa McCombs Stadium. Kickoff is set for 7 p.m.