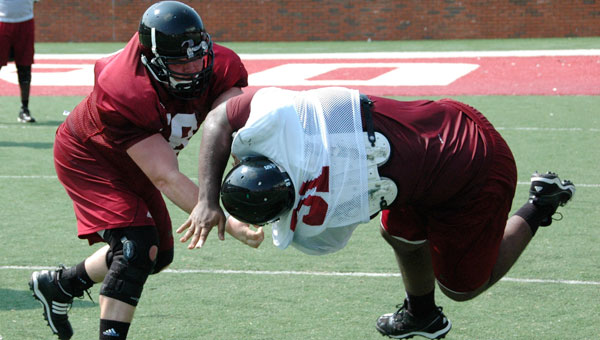 Thompson High School graduate Tyler Clark, a former walk-on at Troy University, has overcome doubters and tragedy as he begins his fourth season as a starting offensive lineman. (Contributed)

He heard someone calling his name. While he was up for the challenge, it was a moment he didn’t see coming.

On the first Saturday in September 2007, Alabaster native Tyler Clark, a freshman walk-on for the Troy University football team, was summoned by offensive line coach John Schlarman midway through the first half of the season opener at Arkansas.

Just a few months removed from high school, Clark was about to make his college debut at left guard in front of 72,000 screaming fans at Donald W. Reynolds Razorback Stadium.

Talk about being thrown into the fire.

“I think there was a little shock in there,” Schlarman said with a laugh.

Using his strength and technique, Clark — 17 years old at the time — held his own against his much bigger, faster SEC counterparts.

Troy eventually fell to the Razorbacks, 46-26, but Clark’s performance gave coaches a reason to be excited.

“He did exactly what we thought he would do,” Schlarman said.

Seven weeks later, Clark learned the move would be permanent.

After position meetings on the morning of the Trojans’ contest with Arkansas State on Oct. 27, Schlarman let Clark know he would be the full-time starter at left guard for the rest of the season.

“He told me about three hours before the game,” Clark said.

“It was nerve-wracking, but I had played in games before,” he said. “Now I was going in for the first play instead of the 15th play.”

Clark’s continued improvement throughout the weeks of practice convinced coaches that he was the right man for the job.

“He won us over with his work ethic and attitude, and he became a good player,” Schlarman said. “We thought he gave us the best chance to win.”

The freshman wasn’t the only one surprised by his surge to the top of the depth chart.

“You don’t ever expect a freshman walk-on to start on the offensive line,” said Larry Blakeney, the Trojans’ head coach. “It takes an extremely tough and smart guy, and that he is.”

Fast forward four years. Clark is set to begin his fourth season as a starter on the Trojans’ offensive line. The senior has started 31 straight games.

He has beaten the odds.

For most walk-ons, being a productive member of the practice squad or getting in the game against the homecoming opponent would be considered a success.

Clark had other ideas.

“I had to work hard to prove myself,” Clark said.

Clark starred at Thompson, where he was a three-year letterman for the Warriors. But the 6-foot-1, 265-pound lineman was considered to be too small to excel at the next level.

Clark received little interest from Division I schools. The University of North Alabama, Jacksonville State University, the University of West Alabama and NAIA member Faulkner University were among the schools that inquired about Clark, but one school closer to home stood out.

“I wanted to go to UAB,” Clark said. “Being in a league like Conference USA would’ve been great, but the doors kept closing. It never really clicked.”

Clark, though, wanted to continue to play football. That’s when Troy entered the picture with some help from his father, Rusty. “His dad came to us about him walking on,” Blakeney said. “We saw his tape and said, ‘Shoot yeah, we’ll let him walk on.’”

“I prayed a lot about it,” Clark said. “Troy’s (door) was open, and I wouldn’t be afraid to go through them.”

So Clark left the northern part of the state and set out to join the Trojans in hopes of using his first year to improve his game enough to catch the eye of Blakeney and the rest of the coaching staff.

“I wanted to redshirt,” Clark said. “If (the coaches) redshirt me, that means they must see potential in me.”

Clark began his freshman season as the fourth-string center, and his request seemed like a foregone conclusion.

However, with limited depth behind the starters, coaches were searching for viable backup options along the line. Clark’s versatility — he played multiple positions on the line in high school — was working in his favor.

“He could do the backup center and guard thing,” Blakeney said.

The coaches eventually moved him to the guard spot where he immediately jumped two spots on the depth chart to the second team.

All of a sudden, the prospects of seeing the field as a true freshman weren’t so grim.

“I played against guys in high school that went to places like Alabama, Auburn and Georgia,” Clark said. “I felt like I could compete at (the Division I) level.”

The break was needed.

It was the middle of May and final exams at Troy were over, bringing the 2010 spring semester to a close.

The football players had a couple weeks off before they were to report for summer workouts. Clark returned home to spend the down time with family and friends.

It was a time for some much-needed relaxation. Or so he thought.

During his second day back home, Clark’s cell phone rang several times. He didn’t want to accept the words he was hearing.

The reference was to Cody Dean, one of Clark’s best friends and a high school teammate. Dean had been killed in a quarry accident.

“Just shock,” he recalled. “I didn’t want to believe it.”

The two friends had grown up together since middle school and had spent countless Friday nights lining up side-by-side on the offensive line at Thompson.

Football, however, was now on the back burner. Clark’s best friend was gone.

The 6-foot-2, nearly 290-pound lineman had already overcome so much. He would’ve been forgiven if he had fallen apart.

Clark admits he would’ve done as much at one point in his life.

“Three or four years ago, if that would’ve happened, I would’ve been angry,” he said. “I wasn’t there physically and emotionally.”

But that wasn’t going to happen. Clark wouldn’t let his emotion get the best of him. Instead, he drew from his well of inner strength.

Although Clark is doing his best to cope, he won’t ever forget his childhood friend. He plans on giving 30,000 people a lasting reminder as well.

Clark will trade his No. 58 jersey for No. 54 for the Trojans’ season opener against Bowling Green on Sept. 4 in memory of his fallen companion. Dean wore the number in high school.

“He talked to me about (changing his number), and it was perfectly fine with me,” Blakeney said.

Clark is making the change not only as a gesture for Dean but also for Dean’s family. Clark is providing tickets for family members so they can take in the moment as well as the game.

“I love his parents,” Clark said. “I want to do it for his parents and for him. I just want to honor him the best way I can. I can’t do much.”

TAKING IT ALL IN

Troy is hoping for more of the same on the field in 2010.

“We’ve made a lot of improvements,” Clark said. “If we work hard, I think we can win the conference.”

That feat would hardly be uncharted waters for the Trojans. Heading into the new campaign, Blakeney’s squad has shared or outright won four consecutive Sun Belt Conference championships while compiling a 33-18 record over that time.

A different number won’t be the only change for Clark heading into the new season.

After starting at guard for the last two and a half years, Clark will be moving back home to center to fill the vacancy left by the graduation of three-year starter Danny Franks.

It’s a move that Clark has welcomed.

“The coaches wanted me to move to center,” he said. “We talked about it for a while. I actually feel more comfortable at center.”

No matter where Clark is playing, his head coach knows where the team will look for leadership.

“He’s a guy that is respected and stands for the right things,” Blakeney said. “He’s the established leader of our offense. He’s a solid guy.”

This season will be the last time Clark suits up for the Trojans. His final game is sure to be the culmination of a fulfilling college football career.

Nearly every college football player’s dream is to continue his career in the National Football League. Blakeney knows the tough road that lies ahead for his smart, yet undersized, pupil.

“It’s the hardest job to get and keep in America just because of the tremendous physical demands,” Blakeney said of the NFL.

But after watching Clark morph into a four-year starter on college football’s biggest stage after coming to his program as a walk-on with next to no offers, Blakeney knows better than to doubt him.

“I would never count him out,” Blakeney said.

Whatever shot he has at the NFL can wait. Clark isn’t taking anything for granted after what he’s been through.

With one year left as the starting center for Troy, he’s not doing anything other than thinking about how far he’s come.

He’s not taking in the moment. He’s soaking it up.

“It’s really just a blessing from God,” Clark said. “I never could imagine in my wildest dreams that I could be starting as a senior. You can’t write a story like this.”

Hillcrest players watch from the sideline as Thompson senior running back Chris Cooper breaks away for a long run in... read more