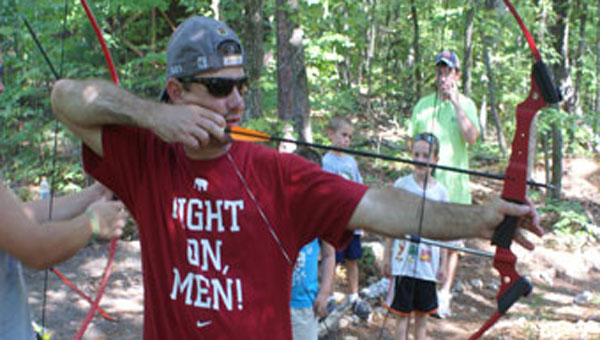 Tim Cox is a regular participant at the tournament shown here in a recent archery activity.

Brothers Phil and Tim Carter began the biannual family archery tournament held in Wilsonville about five years ago as an outreach program.

They hold these two tournaments a year, and have someone come in and give their testimony or speak.

“This year, we will be giving out a DVD with well-known hunters giving their testimonies on television,” explained Phil Carter.

At this family event, they use the Bow Hunters of Alabama rules to guide them. The Howard Hill Archery Club in Wilsonville has been there for more than 30 years and is the range they use for the event. Jerry Hill from Wilsonville was a well-known shooter and did all kinds of things in Hollywood.

“Jerry Hill had a long bow traditional championship there for years. We leased it from him but kept the name Howard Hill Archery as part of our agreement to keep that alive” he said.

After feeling the need to reach out to other fellow hunters, Phil Carter began putting the tournaments together.

“It is a good way to present the gospel to them,” Phil said.

Toddlers all the way to senior adults are seen participating in the archery tournament, and usually 35-40 are there.

“It’s been a good outreach we’ve had some great stories come out of it” Phil explained.

Phil and his brother, Tim, always participate and the youth come out early before the tournament and help set up targets. Pastor Tim Cox also comes and participates in the event. Joe Frost helps cook, and many of the ladies also come to help out.

“It’s been a lot of fun and the outreach part of it has been great,” Carter said.

Phil has shot competitively for 35 years now. He has won 23 state titles, four southeastern titles, and won a world title in 1995. His son, Luke Carter, also participates in archery, and Tammy Carter, Phil’s wife, shoots traditional archery too as she works with him on the event and has two world titles.

“I’ve been in it a long time and seen a lot of great things happen through archery. I’ve been blessed enough to win some stuff that put me in a situation to where I could do this,” he said.

Aug. 28 is the next tournament, which is a one-day shoot that starts at 8 a.m. Everyone will shoot up until 1 p.m., and then everyone will come in while prizes and awards are given out.

Kustom Archery, originally Frank’s Archery, owned by Ricky Jacobs has been a local business in Wilsonville for five years now and can provide a full range of archery needs.

Phil Carter helps work the store himself some.