PGA Tour back at Shoal Creek 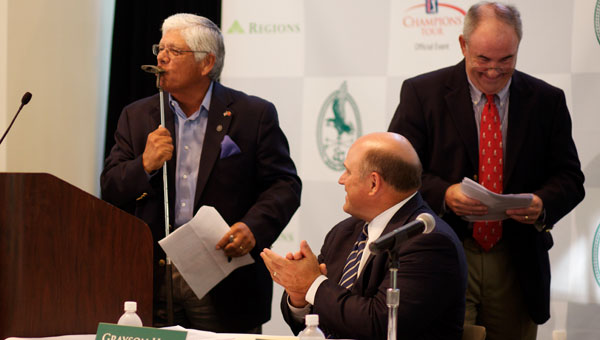 Shoal Creek Golf and Country Club in North Shelby County will be the home of the Regions Tradition, one of the five major championship tournaments on the Professional Golf Association Tour’s Champions Tour, for the next three years beginning in 2011.

The tournament was announced Aug. 23 at a press conference at the Town Hall at Shoal Creek.

Shelby County Manager Alex Dudchock said the tournament will be a big boost to the local economy, with average daily attendance expected to be around 30,000 people during the tournament.

“We’ve got 37 lodging facilities and 2,700 rooms,” Dudchock said. “Any event that brings tourism, including overnight stays, is a great thing for the local economy. Shelby County is excited about it.”

The Champions Tour is the tour formerly known as the Senior PGA Tour. The Regions Charity Classic will no longer be held at the Robert Trent Jones Golf Trail’s Ross Bridge in Hoover.

The 2011 Regions Tradition, sponsored by Regions Financial Corporation, will run May 2-8. Professional golfers likely to participate in the in the 2011 tournament include Fred Couples, Tom Watson and Greg Norman, among others.

World Golf Hall of Fame member Lee Trevino, who won the 1984 PGA Championship at Shoal Creek, said there has been a buzz on the playing circuit with the announcement of the Regions Tradition at Shoal Creek.

“The players are so excited about coming here,” Trevino said. “This is just going to be unbelievable. If I keep hitting my hybrids the way I am, I may play.”

“Charity will be a driving component in this event,” Stevens said.

Stevens said approximately half of the 1984 PGA Championship field will be part of the first Regions Tradition field.

“We’ll be reliving a lot of history when we get back here in May,” Stevens said.

In the 20-year absence of PGA tournaments at Shoal Creek, the course has played host to several amateur tournaments, including the 1994 Jerry Pate Invitational won by Stanford University’s Tiger Woods.

“We’ve worked hard not only to get minority members, but minority business as well,” Thompson said. “We try to be a responsible club and look like our community.”