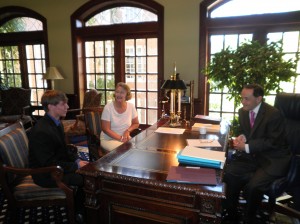 The brightest and the best of rising high school seniors attended The Alabama Governor’s School held at Samford University this summer.

John Howard “Trey” III represented Shelby County High School. Howard was teamed with 75 peers from across Alabama, all tops in their class.

Howard, the son of Pamela and Johnny Howard Jr. of Columbiana, has two siblings, 9-year-old twins, Jacob and Haley. He is the grandson of Sara and John Howard Sr. (Columbiana), and Ruby and David Atchison (Wilsonville).

Howard is No. 1 in his class with a 4.0 average, has played baseball “all (his) life” and volunteers with the Columbiana Volunteer Fire Department, where his father is fire chief.

The Alabama Governor’s School was founded in 1987 by Dr. Carolyn Green Satterfield, professor of history at Samford University. Green was asked to create an honors academy for exceptional students and pattern it after existing governor’s schools in North Carolina, Virginia and Georgia.

Samford and its President Andrew Westmoreland are strong supporters of The Alabama Governor’s School. Westmoreland opens the school’s session and invites the students for lunch at his home.

“I am more and more impressed with the students who come,” said Green. “These students are fabulous, so eager to learn, and are what makes this program work. The students are all with their academic peers, a unique place to be normal and challenged as never before.”

“It was an incredible experience,” said Howard. “I met so many new friends. The program broke me out of my shyness and woke me up to be more of a leader. I especially enjoyed problem solving with my team and being a member of a group where everyone does their job.”

Howard is aiming for an advanced degree at SCHS. He will take three AP classes, calculus, English, and chemistry, along with government and Economics, and co-op with the School of Technology to work half days in his family business, Howard Tire Company.

Howard wants to attend college in Alabama and hopes for a scholarship to further his education to study criminal investigation and/or architecture, his two areas of interest.