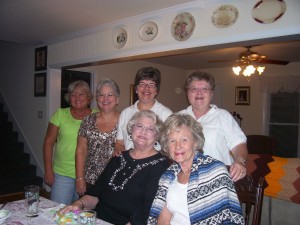 “We laugh together and we cry together,” Susan Shaw Donahoo said at a recent get-together of the “Rah-Rah Sisterhood.”

Most of the “Rah-Rahs” were Chelsea cheerleaders in the early years, she said. Other friends were later adopted in.

“That was before Chelsea had a high school,” Walton added. “But I worked with the Chelsea cheerleaders while I was in college and was a sponsor for a little while.”

Donahoo was also a sponsor while teaching at Chelsea.

Four of the women go to church together.  Husbands of two are golf buddies.

“And June was invited in because she had a beach house available,” Hunter joked.

“We’re always there for each other,” Collins said; the others agreed.

Donahoo said when she was in the hospital before her son Josh was born, Jo Lynn came, held her head over the side of the bed and washed her hair.

“Dot put roses in the church the day he was christened, and Ann is his godmother” she said.

Josh was very sick when first born. “We all wore our knees out praying for him,” she said. Today, he is a healthy, strapping young man.

Since the women began getting together, they’ve had several family deaths: Fertel’s mother and grandson, Hunter’s husband, Walton’s son and mother, Coleman’s mother.  “We’ve all been friends for years and have been through so much together,” Donahoo said.

“We do a lot of counseling with each other,” someone else added.

Walton said she had recently lost her son when they went on their annual beach trip to Gulf Shores last year.

Her friends listened to her do a lot of talking and cried with her.

They drove over to Captain Anderson’s on Panama City Beach, she said, and there was a jeweler there with a bracelet matching a ring she was wearing.

She “kept admiring the bracelet,” and when they got back to the car, she found that her friends had bought it for her.