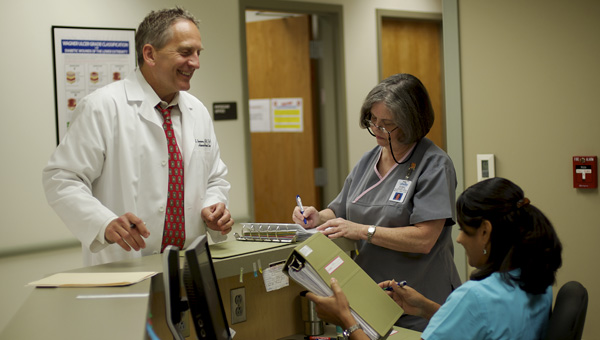 As Shelby Baptist Medical Center Staff Physician Everitt Simmons removed a bandage from a man who had been seeking treatment for several years, the patient immediately burst into tears.

For years, the man had been dealing with a complex, non-healing wound, and had fought the injury through session after session at the Medical Center’s Advanced Wound Care Clinic.

And as Simmons removed the bandage, the patient was overcome by what he saw.

“Here is a 70-year-old guy who has burst into tears because we have helped him get through a wound he has been battling for years. That’s gratifying,” Simmons said. “When you take that bandage off and everything has healed up, it’s an incredibly rewarding experience.”

“(The patients) are just so appreciative because we have helped them get rid of something they have been battling for a long time,” said clinic Program Director Karen Brittain.

Simmons, Brittain, Dr. Robert Carraway and a host of other doctors and support staff have been working at the clinic to help heal some of the most stubborn wounds for the past two years.

Doctors at the clinic regularly work to heal tough wounds, like venous and diabetic ulcers, complex soft tissue wounds and brown recluse spider bites, and have helped many patients who had given up hope before coming to Alabaster.

“Because of that, the patients really become a part of our family,” Simmons added, noting patients often donate food and family pictures to the clinic. “I absolutely love being up here. I look forward to work every day.”

Simmons still spends about 40 percent of his time working in the hospital’s emergency room, where he has been for more than 30 years. However, he is progressively spending more time in the Wound Care Clinic, where he will eventually work full time.

The two environments vary wildly, and Simmons said he is enjoying spending time getting to know his patients by treating them over an extended period of time at the clinic.

“At the Wound Care Clinic, we don’t just look at the wound. We look at the patient as a whole,” Simmons said. “Why is the wound not healing properly? Is the blood supply inadequate? Is it a problem that stems from diabetes not being properly controlled?”

Working in the Wound Care Clinic also gives Simmons more time to focus on the faith-based aspect of medical treatment, he said.

“They like us to pray with them every time they come in for treatment,” Simmons said. “Our perspective here is that God is the ultimate healer.”

Act of Congress to play for library fund

Birmingham-based Act of Congress will play at 4 p.m. Aug. 29 at Mt Laurel Turtle Back Park in a benefit... read more