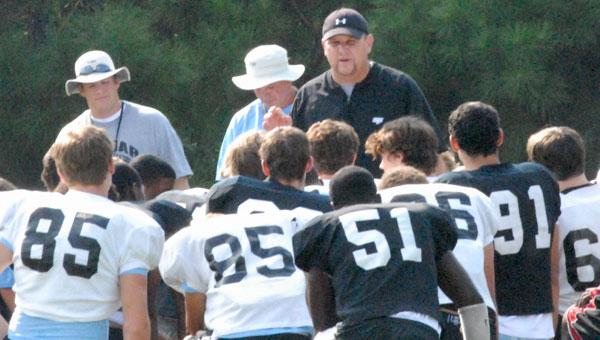 Interim Spain Park High School football coach Ben Berguson didn’t hesitate when school principal Chris Shaw asked him to step in and lead the Jaguars after head coach David Shores was put on administrative leave following allegations of a physical altercation with a player at a team practice Aug. 24.

Berguson, who was tabbed as an assistant head coach by Shores before the 2008 season, said his commitment to the Spain Park players played a role in his decision.

“I thought it was something I needed to do,” Berguson said. “My only job is to get the kids ready for the Grayson game Saturday.”

Berguson, who has served as the Jaguars’ offensive line coach and assistant head coach, will make his head coaching debut Saturday in the Progressive Football Challenge against Grayson (Ga.) at North Gwinnett High School. Kickoff is set for 4 p.m. The game will be televised regionally by Comcast Sports Southeast.

Berguson said he doesn’t plan to make any changes to Spain Park’s current football philosophy. The only coaching change that will be made is offensive coordinator Brooks Dampeer will take his place in the coaching box upstairs.

“We aren’t going to change anything,” Berguson said. “We’re just going to continue to do what we’ve done all along.”

Berguson said assistant coaches Kenneth Hand and Brian Maner, who have head coaching experience in their past, will help in his transition to interim head coach.

He played center at Louisiana Tech from 1988-1991 and was a member of the Bulldogs’ 1990 Independence Bowl team.

Berguson, a Rushton, La., native, attended graduate school at the University of Louisiana-Monroe. Berguson and his wife, Clara, have a 3-year-old son named Luke.

Shaw, who could only say the incident leading to Shores’ removal was an “on-the-field incident at the beginning of practice” Tuesday, said school officials don’t have a timeline set to address Shores’ coaching future at Spain Park.

“We are doing a thorough investigation,” Shaw said. “We’re doing our due diligence. It’s only fair to Shores and the players.”