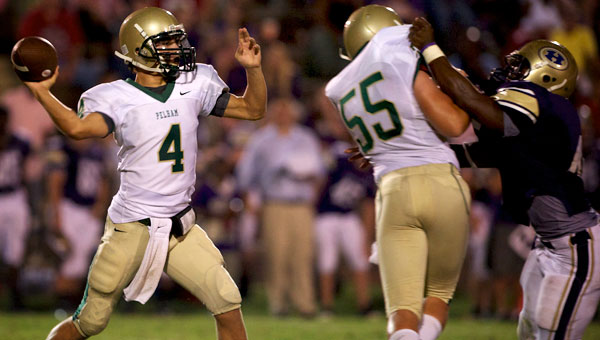 HUEYTOWN — A costly turnover in the end zone and a failed fourth-down conversion late in the game kept the Pelham Panthers from emerging victorious from their regular season opener at Hueytown.

The Panthers fell to the Golden Gophers 36-21 after a nightlong showdown between Pelham’s stout defense and Hueytown’s dynamic quarterback Jameis Winston. 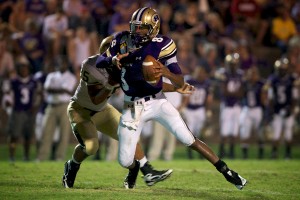 “I thought we had some good chances to win it tonight,” said Pelham head coach Brett Burnett. “We just have to go back and get ready for next week.

“It’s a process. It’s a journey,” Burnett added. “I saw a lot we can build on during this game.” 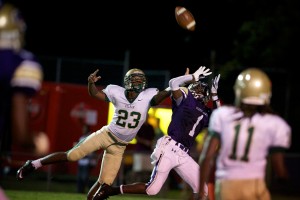 Hueytown lit up the scoreboard midway through the first quarter when Winston broke away for a 14-yard scoring run. Taylor Latham’s extra point was good, giving the Golden Gophers a 7-0 lead.

But Pelham was quick to answer on the next series, after wide receiver M.J. Brown caught a 28-yard pass to put the Panthers on the 5 yard line. Austin Lohr then reeled in a pass in the end zone from quarterback Gray Cato. Cameron Haynes added the extra point to tie the game at 7-7.

But it would be the last time the Panthers were even with Hueytown, as the Golden Gophers quickly racked up 13 more points in a matter of minutes. Winston found Hueytown’s Davion Johnson in the end zone with 23 seconds left in the first quarter. Latham’s extra point put the home team up 14-7.

Winston then added six more points to the board when he ran the ball in from 5 yards out to score. Latham’s missed extra point left the Panthers trailing by 13.

Pelham recovered a Hueytown fumble on the Golden Gophers’ 35 yard line late in the second quarter, but failed to score when running back Dominique Harris fumbled in the end zone, resulting in a Hueytown touchback.

The Golden Gophers then capped off the half when Latham connected on a 25-yard field goal, giving Hueytown a 23-7 lead at the half.

Pelham jumped within reach of Hueytown during the Panthers’ first session of the second half when Tucker Thomas reeled in an 18-yard pass from Cato to score. Haynes’ extra point brought the score to 23-14.

Hueytown jumped ahead again a few series later when Winston broke out for a 55-yard scoring run. Latham’s extra point gave the Golden Gophers a 30-14 lead.

The Panthers answered early in the fourth quarter when Cato connected with Reed Bright on a 34-yard scoring pass. Haynes’ added the extra point to bring the game to 21-30. 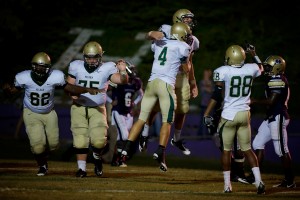 Pelham quarterback Gray Cato (4) celebrates with wide receiver Reed Bright after the two connected for a touchdown in the game Aug. 26.

The Golden Gophers’ Ronald Stewart scored the last points of the night on a 1-yard run into the end zone. A failed two-point conversion brought the score to 36-21.

Pelham quickly drove down the field during its next series, but a failed fourth-down conversion on the Hueytown 24 yard line finalized the score.