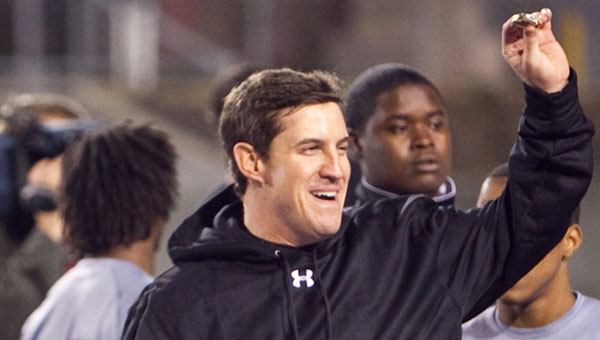 Suspended Spain Park High School football coach David Shores responded with shock and disappointment after being placed on administrative leave after allegedly being involved in a physical altercation with a player at a team practice Aug. 24. (File Photo)

Suspended Spain Park High School football coach David Shores responded with shock and disappointment after being placed on administrative leave after allegedly being involved in a physical altercation with a player at a team practice Aug. 24.

“I am shocked and disappointed by the handling of this entire situation, including the fact that I have been placed on administrative leave,” Shores said.

Shores claims he was attacked by one of his players during the practice and didn’t respond with physical aggression. Shores said the player was sent home from practice.

“A student-athlete on my team lost his cool and attacked me during a physical football drill at practice on Tuesday,” Shores said. “I did not retaliate or otherwise fight back.  Other coaches pulled the student off of me and we sent him home.”

Shores questioned the objectivity of the Hoover City Schools’ board members  investigation into the incident.

“Apparently the board decided that an investigation of that incident was warranted, and it suspended the athlete and placed me on administrative leave pending the investigation,” Shores said.  “If the board conducts a proper and unbiased investigation, it will learn that neither I nor anyone else did anything to justify anyone being placed on leave or suspended or anything else.  No investigator or attorney has contacted me at this time, and I have not been notified of the details of the investigation.  I understand that the school board’s attorney has attempted to place every Spain Park football coach and every other employee under a gag order, and I have been told he has literally threatened them with their jobs if they talk to me.”

Shores hopes for a reconciliation with the player involved in the incident.

“I was and still am willing to speak to the family and the player and work through this issue in hopes that the student-athlete could once again participate with his teammates,” Shores said.

Shores said he hopes the situation is resolved soon and he expects to be reinstated as the head coach of the Spain Park football team.

“Hopefully this will be over soon and we can get back to our lives and back to focusing on educating these students and playing football,” Shores said. “If not, the Spain Park students and our football team will be the ones that suffer, and I will not stand for that because I care for these kids, their well-being and our school.  I expect to be reinstated soon.”

“Due to the ongoing nature of this incident, we are not in a position to respond to Mr. Shores’ statement at this time,” Gaston said.

Shores was placed on administrative leave following a physical altercation with a player at practice Tuesday, Aug. 24, Gaston said.

“As of right now, we did have some allegations yesterday at a football practice at Spain Park of a physical altercation between a player and Coach Shores,” said Gaston.

Spain Park officials took their preliminary findings to Superintendent Andy Craig. After discussions with Craig, Shores was placed on administrative leave as of Wednesday afternoon.

“Coach Shores will likely remain on administrative leave until the investigation is absolutely complete. We don’t have a time line. We just plan to conduct as thorough an investigation as possible,” said Gaston.

Shores has compiled a 14-9 record in his first two seasons as the Jaguars’ head coach. Shores, who served as the defensive coordinator under former coach John Grass during the Jaguars’ run to the Alabama High School Athletic Association Class 6A championship game in 2007, led Spain Park to a 10-3 record and an appearance in the quarterfinal round of the playoffs in 2009.

Shores, a 1994 graduate of Elmore County High School, attended Auburn University as an undergrad. Shores played for the Tigers in 1996 and 1997 then began his coaching career as a student assistant in 1998. He served as a graduate assistant on Tommy Tuberville’s first Auburn staff before becoming a defensive assistant to Spence McCracken at Opelika High School for the next three seasons.

Shores then had his first opportunity to work in the Hoover school system when he accepted a job as a defensive assistant to Rush Propst at Hoover High School from 2002 to 2003, with the Bucs winning state titles both years. The 2004 season took Shores to LSU to serve as a defensive assistant to coaches Nick Saban and Will Muschamp. Upon returning to the Birmingham metro area in 2005, Shores served as the defensive coordinator at Pelham before taking over as the Spain Park defensive coordinator.

The Jaguars fell to Auburn 30-3 in an exhibition contest Aug. 21 in the Alabama High School Athletic Association Champions Challenge at the Cramton Bowl in Montgomery.

Berguson is replacing David Shores, who has been placed on paid administrative leave.

Berguson will make his head coaching debut Saturday in the Progressive Football Challenge against Grayson (Ga.) at North Gwinnett High School. Kickoff is set for 4 p.m. The game will be televised regionally by Comcast Sports Southeast.