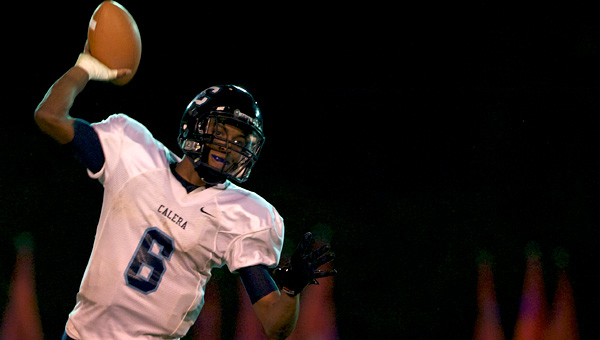 Wells, who scored two rushing touchdowns and also threw a 63-yard touchdown strike to receiver Cikia Shanks, felt he didn’t play his best game against the Bulldogs in the Shelby County Reporter Game of the Week.

Wells gave credit to two other players who share the backfield with him, running backs Eugene Rodgers and Tedarius King, for picking up the slack. 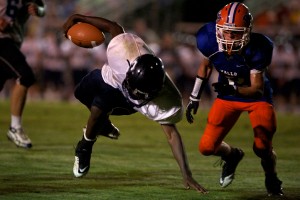 Calera running back Te'Darius King tries to keep his balance in front of Montevallo's Jessie Cox.

Rodgers and King combined to rush for 140 yards as Wells only managed 48 rushing yards and 121 passing yards in the season opener. King led the Eagles with 91 yards and a touchdown on 10 carries.

“I’m not going to make any excuses,” Wells said. “I just played bad. But tonight just helped everybody see that I’m not everything we have.” 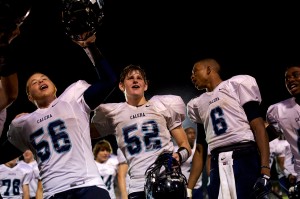 Calera players celebrate their victory over Montevallo on Friday, Aug. 27.

Wells still played a key role in the Eagles’ victory. His 63-yard strike to an open Shanks down the middle of the field with 5:12 remaining in the first quarter jumpstarted a stagnant offense, which had to sit out a 1:15-minute lightning delay before taking the field for the kickoff.

Wells’ 23-yard touchdown run, set up by a 38-yard dash by King on the play before, with 4:45 remaining in the first half gave the Eagles a 13-0 lead at halftime.

Money Lyles capped the scoring for Calera with a 42-yard touchdown run with 2:10 remaining in the game.

Montevallo had a few scoring chances, but couldn’t capitalize despite rushing for 175 yards and securing 12 first downs in the contest. The Bulldogs took advantage of long runs by running backs R.J. Scaife and Garrius Chappell to drive deep into Calera territory. 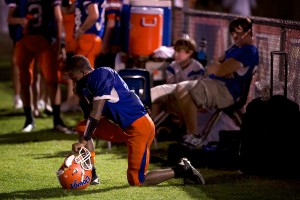 As Friday's game against Calera comes to a close, Montevallo's R.J. Scaife takes a moment alone on the sideline.

However, several drives ended without any points on the scoreboard. Montevallo kicker Brett Gray missed a 47-yard field-goal attempt in the first quarter and couldn’t connect on a 27-yard attempt late in the fourth quarter.

“Our defense kind of carried our team tonight,” Martin said. “Our back was against the goal post all night. I was extremely proud of our defense.” 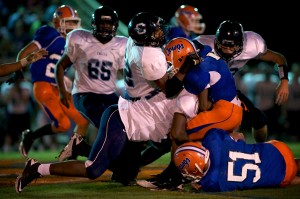 Montevallo's R.J. Scaife gets smothered by a group of Calera defenders during Friday's game Aug. 27.

Montevallo High School presented a scrapbook to the family of former Bulldogs’ coach Richard Gilliam during a pre-game ceremony.

Gilliam, who passed away in a car accident in the spring, helped integrate the school.

Montevallo volleyball coach Tena Niven, who helped organize the ceremony, said the school was proud to offer the book of memories to Gilliam’s family.

“It was like a big family reunion for them,” Niven said.