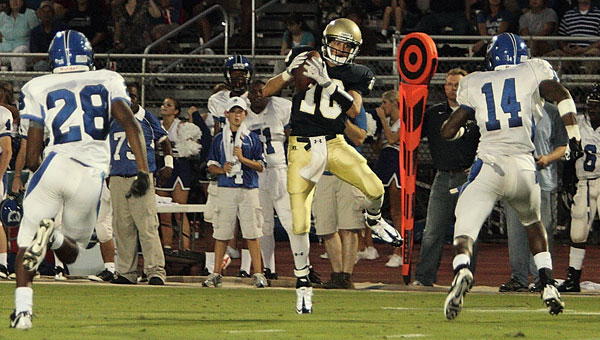 One figure, though, reigned supreme over all the stats — 1.

The Lions’ defense made the most of its one shot to make a stand with the game on the line, and the offense held onto the momentum to lift Briarwood Christian (1-0) to a season-opening 23-13 win over defending Class 5A champion Demopolis (0-1) at Lions Pride Stadium Aug. 27.

Junior quarterback Ben Craft went 17-for-24 for 231 yards to lead the Briarwood offense. Running back Sam Whitaker paced the rushing attack for the Lions, as the junior tallied 72 yards on 15 carries and one touchdown.

“(This win) shows we can play with a real good team,” Briarwood head coach Fred Yancey said. “We’ll sort it all out and see 1,000 things we’ve got to do better, but we beat a good team. You get better when you beat a good team.”

Clinging to a 16-13 lead a few minutes into the fourth quarter, the Briarwood defense was on its heels, as Demopolis looked to be on the verge of driving the field to tie the game by way of a field goal or possibly take the lead.

After recovering a fumble on a muffed punt by Briarwood’s Kalan Reed, the visiting Tigers took over at their 48-yard line. Demopolis used five plays — and a Briarwood personal foul penalty — to march the ball to the Lion 28-yard line.

The Tigers decided to forego the shot at a game-tying field goal and, on fourth-and-four, kept the ball in the hands of starting quarterback Ben Pettus on an option play to the right side.

Pettus was stopped one yard shy of the first down, turning the ball over to the Briarwood offense.

The offense made the defense’s effort count.

Briarwood went 75 yards on nine plays, capping the offense’s only scoring drive of the night with an 8-yard touchdown run by Sam Whitaker, who sprinted up the middle for the score. The touchdown extended the lead to nine and gave the Lions some much-needed breathing room.

“The offensive line did just a great job of blocking out, and I just ran right through,” Whitaker said. “There was nobody in there.”

The points weren’t as easy to come by earlier in the contest.

On its first possession of the second quarter, the Lions went to their bag of tricks to loosen up the Tigers’ aggressive defense.

With the ball on the right hash of the Demopolis 27-yard line, Whorton lined up for his third field goal attempt of the first half. This time, he wouldn’t be kicking it.

“We talked about that play and the fact that we’d probably use it in a field goal situation more than an extra-point situation,” Yancey said. “I told (the coaches) on the sideline if we can go for another field goal, we’ll run our play. When we run our play, I said, ‘It’s going to be six.’”

Holder Cole Pearson took the snap and handed the ball off to halfback Matt Furuto, who was coming left on an end around. After taking few steps, Furuto pulled up and fired downfield to a wide-open Michael Lathem, who was streaking across the middle of the field. The touchdown with 5:17 left before halftime gave the Lions a 13-0 lead after a successful extra point.

Demopolis wouldn’t go quietly, as Pettus found tailback Demarcus James streaking down the middle of the field for a 32-yard touchdown pass with 2:50 remaining in the second quarter to make the score 13-6 at the half.

The Lions will look to improve to 2-0 next week as they host region opponent Moody Sept. 3.