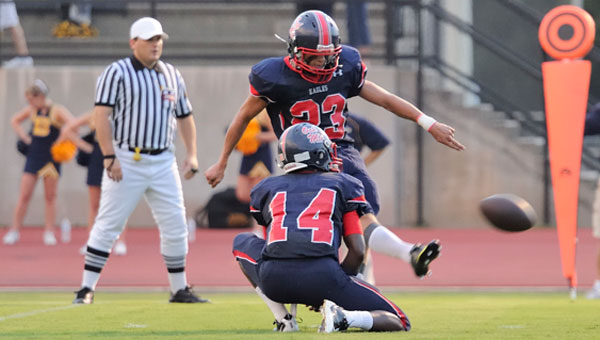 By PATRICK BALDWIN / For the Reporter

Friday night’s game between Oak Mountain and Buckhorn seemingly had it all.

Missed opportunities, special teams breakdowns, key injuries and even a first quarter power outage dominated the early storylines of the evening. But in the end, Buckhorn found a way to make the most of the opportunities handed to them en route to a 34-28 quadruple overtime victory Aug. 27 at Heardmont Park.

Oak Mountain got on the board first with a 28-yard Mitch Mathias field goal after taking the opening kickoff and driving deep inside Buck territory.

Buckhorn would counter with a solid opening drive of its own, but a botched snap on the ensuing field goal attempt turned the ball over on downs to Oak Mountain.

After both teams traded punts and mistakes for a quarter and a half, Buckhorn finally found the endzone with 21.7 seconds left in the first half. Roddrick Anderson’s a 2-yard touchdown run put the Bucks up 7-3 at the half.

But trailing at half wasn’t the only concern for Oak Mountain head coach, Jeff Harris. The injury bug had reared its ugly head once again.

With last year’s starting quarterback Paul Angel already out for the year with a torn ACL, senior starter Trey Page left the game right before halftime with a major ankle injury of his own.

Quinn and company took their opening drive of the second half and moved the ball deep inside Buck territory. But a costly penalty and back-to-back incomplete passes stalled the drive out forcing the Eagles to settle for another Mathias field goal.

On the very next possession, Buckhorn fumbled on the very first play giving the Eagles great position and a chance to take the lead. Three plays later and Oak Mountain was on the board again thanks to a 13-yard scamper by Bradley Bostick. The two-point conversion was good and Oak Mountain was up 14-7 heading to the fourth quarter.

The Eagles had a chance to put Buckhorn away early in the quarter. But a costly holding penalty on a 58-yard touchdown run by Heath Quinn killed the drive forcing the Eagles to punt.

With new life and a seemingly worn out opponent standing across the way, the Bucks made the most of the mistakes and gifts dolled out by Oak Mountain.

After converting two huge third-down conversions late in the game, the Bucks found redemption and the endzone with less than a minute to go in regulation when Anderson bowled his way in from 2 yards out. The extra point was good and the game headed to overtime.

Buckhorn struck first on a 1-yard run by Anderson. Oak Mountain countered the Buck’s score with a touchdown run of its own, this time courtesy of a Bradly Bostick 10-yard run.

After failing to score in the second overtime and swapping touchdowns in the third, the two teams needed only one more extra frame to cap off this strange season opener.

Oak Mountain took the ball first in the fourth overtime but failed to score on its possession. Finally, after countless gifts and second chance opportunities, Buckhorn seized the moment and scored the winning touchdown on 1-yard Anderson run. It was Anderson’s fourth score of the evening and his second of overtime.

Midway through the fourth quarter, backup quarterback Heath Quinn left the game with an injury as well. Zach Stephenson finished the game for the Oak Mountain.

Up next for the Eagles is a Sept. 3 cross-town trip to Pelham. Both teams will be looking for their first win of 2010.