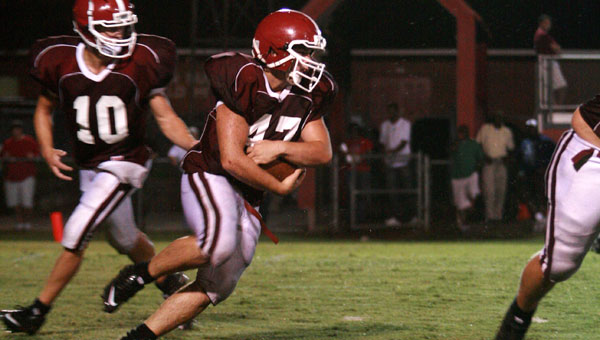 Following a mammoth thunderstorm that rolled through Columbiana, the Shelby County High School Wildcats were washed out by the visiting Pell City Panthers 42-7 in the season opener for both teams Aug. 27.

For the first time in a long time, the Wildcats will enter week two with one loss under their belts.

On their first drive of the delayed game, the Wildcats rewarded their saturated faithful with a scoring drive that was capped off by Evan McNeal on a 10-yard touchdown quarterback scamper. With the successful point-after-attempt, the Cats were out front 7-0.

Despite the jolt of the Wildcats’ momentum, the Panthers answered the bell with a seven-play scoring drive and hitting the end zone from the Wildcat 15-yard line.

As the first half rolled along, turnovers, missed tackles and a stingy Panther defense dealt the Wildcats an empty hand as halftime approached.

However, the Panthers widened the margin with 28 unanswered points to head into intermission with a 35-7 lead.

The second half saw the Panthers chalk up another score on a long run up the heart of the Wildcat defense.

A young Wildcat team was dealt an awakening blow with region play looming in week two. Inexperience at positions was exploited.

McNeal finished the night with 102 yards on the ground.  As a unit, the Wildcats’ offense tallied 225 yards on the turf.  The Panthers clawed the Wildcat defense for 361 total yards from scrimmage.

The Wildcats will host the Erwin Eagles at home next Friday night.