Thompson falls in overtime to Stanhope Elmore in season opener 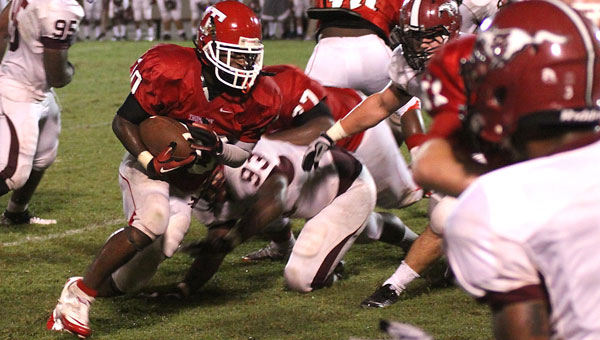 A new era in Thompson High School football began with a tough defensive struggle that saw the Warriors finish regulation tied with the Mustangs of Stanhope Elmore.

The only flaw in the season opening performance was an interception in the first overtime that ended the Warriors’ possession and gave the Mustangs the chance to kick a game-winning field goal to seal a 10-7 win.

The excitement was high as the stadium filled early and the buzz was moving through the crowd as the new look of the field house and of the uniforms put a new face on a new season.  The fans had to wait until the third quarter to see the best part of the new look.

“It has been some time since we have seen a full-game effort put forth by a Warrior team like we saw tonight,” said Thompson coach Bruce Hill. “These young men played a complete game and we just came up a little short.”

After a long lightning delay in the first half, both teams went to the locker room wondering what it was going to take to get into the end zone.   The Mustangs took the second half kickoff and began their drive on their own 40-yard line.

Aided by a holding penalty by the Warriors, the Mustangs quickly moved the ball into the red zone and then punched it in on a 7-yard quarterback run.  The extra point made it 7-0 visitors and Thompson faced the daunting task of coming back in the fourth quarter.

Unlike past seasons where the determination faded late, this new Warriors showed their resiliency and continued to fight way back.  After a big defensive stand, the Warriors took over on their own 35-yard line and methodically ran the ball at the Mustangs.

Senior Chris Cooper was the workhorse, carrying the ball 38 times for 138 yards, including 48 yards on this drive. With 24 seconds remaining, sophomore quarterback Trey Matherson punched it in from the 1-yard line to put the Warriors on the board.  Matt Nall’s extra point tied the score and pushed the game into overtime.

Thompson took the first possession and on third down Matherson’s pass sailed just high and was intercepted by the Mustangs. While the defense pushed the Mustangs back during their possession, a 21-yard field goal gave them the overtime win.

“We have a lot of positives to work with as we prepare for next week,” Hill said.  “I am very pleased with the effort  and look forward to building for our next game and watching the progression of our Warriors.”