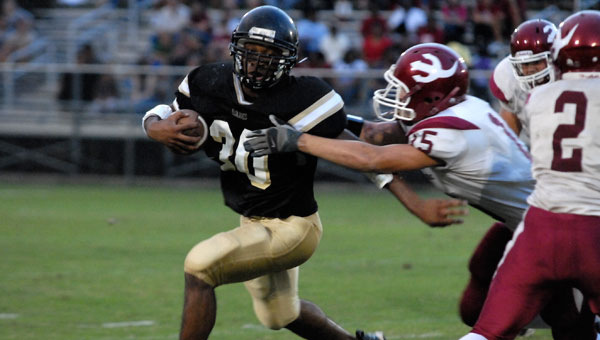 The Maplesville Red Devils put the Vincent Yellow Jackets away  26-0 in the season-opening game for both teams Aug. 27 through a strong passing game by senior quarterback Matt Hamner.

On their first drive, Hamner threw a pass to sophomore Anthony Johnson to get the Red Devils to the 50-yard line. On the next play, senior Hunter McCay ran for a 50-yard touchdown with 6:13 left in the first quarter.

Maplesville kept the pressure up and scored another touchdown with 4:09 left in the second quarter on a pass from Hamner to sophomroe Kelvin Hall.

McKinney kept the ball more often than not in an attempt to run through Maplesville’s tenacious defense.

“I liked the effort, we hung in there and fought hard,” Vincent head coach Dwight Spradley said.

Spradley feels that his team did well considering its size disadvantage.

“I think it was one of our best efforts for the season,” Spradley said. “Being low in numbers made it more difficult, but tonight was encouraging.”

Maplesville won’t be celebrating for long, as head coach Brent Hubbert feels there are several adjustments that need to be made in preparation for their next game.

“The defensive effort wasn’t where it should have been, and we had too many penalties, but it was our first game,” Hubbert said.

Although some kinks need to be worked out, Hubbert was impressed with his offensive line and defensive effort.

With only four minutes left, Vincent made a push at Maplesville’s 11-yard line. The defense held and eventually forced a turnover on downs.

Maplesville plays its next game Sep. 3rd at Keith, while Vincent will play next Sep. 3rd at Central-Hayneville.