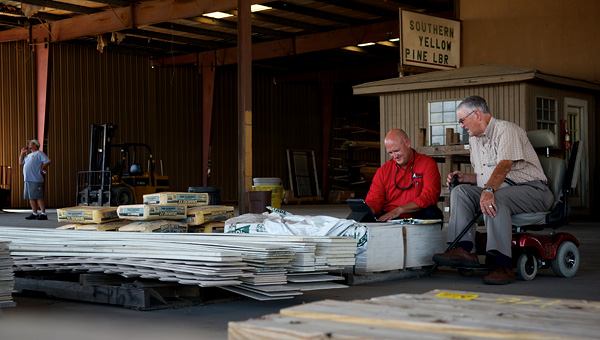 The word “auctioneer” typically conjures images of a man behind a podium quickly spouting off a near-incomprehensible string of words and numbers as onlookers take turns raising and lowering their numbered paddles.

But for one Alabaster company, a change from live, traditional auctions to an online format is drawing a much larger crowd of customers who prefer mouse clicks to cue cards.

“My business has changed so much over the past few years,” said Chip Pearce, an auctioneer and broker for Alabaster-based Chip Pearce and Associates. “I was a bid caller on-site for 30 years, and I am one of less than 2 percent of bid callers nationwide who have made the shift to online auctions.”

Pearce and his company, which is part of the national auction network Marknet Alliance, manages auctions and liquidations for many companies across the state and the country.

The company is currently handling three local auctions at the former Central Builders Supply and the former Moore-Handley building in Pelham, and the BE&K Construction Firm in Alabaster. 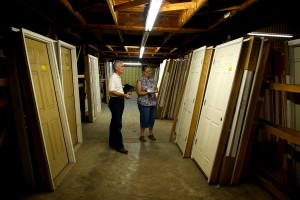 Leonard and Anita Bynum of Madison, Ala., look over inventory that is included in the online auction.

BE&K was recently bought out by another company, and the new company decided to ship equipment, like automobiles, welders and power tools from completed job sites all over the country, to the Alabaster BE&K location to be auctioned off.

Last year, Pearce auctioned off nearly all of Moore-Handley’s inventory after the company declared bankruptcy.

Pearce is now gearing up for another auction of “hundreds of thousands of dollars” of metal and scrap still remaining in the Moore-Handley building.

Because of the nature of the auction process, Pearce’s business typically picks up substantially when the economy is down.

“An auction gives a person the opportunity to buy items at a wholesale price and then turn around and sell it for a profit,” Pearce added.

Quickly liquidating inventory after a business closes helps clear the building for a new company to move in, Pearce said.

By opening his auctions up to the Internet, Pearce has developed a national and international customer base from his office in Alabaster.

“Most of my auctions are in an eBay format,” Pearce said. “Where I used to spend a lot of my time doing live auctions on-site, now I go out and do auction setups, write up descriptions of the items and photograph them.

“I am in the minority by far by conducting my auctions online. Ninety-eight or 99 percent of auctioneers in the country still do live, on-site auctions,” Pearce said. “Making the switch to online auctions has done wonders for my business.”

For more information about Pearce and Associates and its auctions, visit Soldalabama.com.