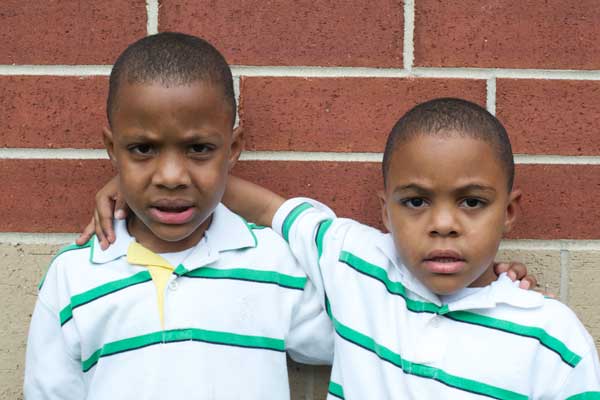 Jamiee Brown couldn’t imagine what she was getting into with a household full of men. She already felt outnumbered with one son and her husband to deal with on a daily basis.

Five years ago she found out she’d be adding two more males to the pack.

“I was honestly dumbfounded as they say,” Brown said about discovering she was pregnant with twins.

“Being the only girl in my household is pretty hard – everything is guy oriented. Me being a big tomboy helps out because I can relate to them a bit better,” Brown said. “Its never a dull moment that is for sure.”

Tanner and Tyler have been a joy though, she said.

Tyler wants to be a big boy already, but not Tanner. He’s Brown’s momma’s boy.

She said Tyler keeps her more on her tows. She said he’s active and independent. That’s why when it came time to place them in kindergarten she knew what she ha to do.

“The boys are in separate classes. Tanner is so dependent on Tyler that we wanted Tanner’s personality to have a chance to blossom,” Brown said. “It has posed a lot of challenges because Tanner wanted us and didn’t want to get on the bus.”

Now the boys are learning to go their separate ways.

Tanner has started getting dressed on his own and is learning to branch out, Brown said.

“We’ve already seen him take initiative to do things on his own,” she added.

Though Tanner is the oldest, its Tyler that acts like the big brother.

“Tyler doesn’t like to admit it, but they look for each other,” Brown said.