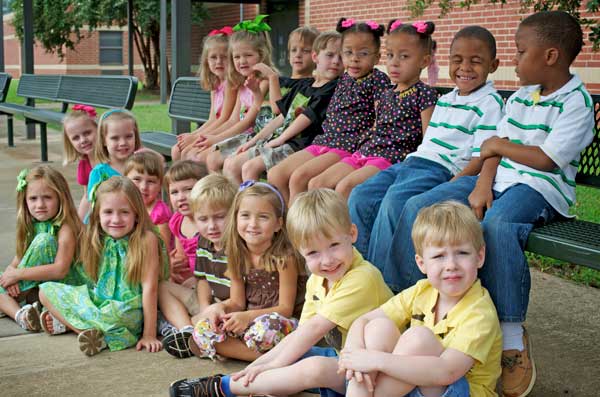 ALABASTER — A teeny brown freckle dotting the left side of Shayna McGee’s nose remains the only way Creek View Principal Joyce Dixon can tell the 5-year-old apart from her identical twin sister Jayden.

When Alex or James Stafford walks by, Dixon looks to see what color the boy is wearing; their mother, Julia, almost always dresses Alex in blue and James in red.

Creek View Elementary’s classrooms include 15 sets of twins this year; nine of which are in kindergarten alone.

“When we were sitting down to do rolls for the school year, it finally hit me exactly how many twins we had. I couldn’t believe it,” Dixon said. “They are just so cute — you see them coming down the halls and the little girls are always holding hands.”

Dixon’s personal preference would be to keep twins together at such a young age, but the school honors parents’ wishes for class placement.

“They’re always known as the twins —they’re rarely known as Jayden and Shayna,” McGee said. “I wanted them both to have the chance to develop their own individuality.”

The parents of the nine sets of kindergarten twins all differ on this decision.

Tanya King said her boys, Ian and Adam, weren’t quite ready to be apart.

“They received the Peanut Butter and Jelly award at preschool last year because they were so close,” King said.

The boys specifically requested that they stay together.

“They have their own friends, but at the end of the day they go right back to each other,” King said.

Giles said she knew this would be important for them both to learn in their own way.

She said her daughter Anna is a more athletic child, while Maggie is the brain.

“We wanted Anna to have an opportunity to shine without Maggie being the voice for both of them,” Giles said. “This way we feel they will each get the attention they need based on their own personal learning style.”

Thames began teaching 18 years ago and has taught many sets of multiples. This year she has both Maddie and Conyers Preveaux and Haley and Hannah Stovall in her class.

Thames knew, of course, it would be easy to tell brother and sister Conyers and Maddie apart. Distinguishing between Haley and Hannah proves a bit more challenging.

“As you get to know them, you learn how unique they each are whether its through their personalities or slight differences in facial expressions,” Thames said.

Thames keeps the sets of twins at the same table at first. As the school year progresses, she begins to move them around the room as she does with all the students.

“I do that so all the students learn to get along with new people,” Thames said. “I’ve seen even last week where they have begun to branch out to make their own friends. But I do think it has been a wonderful form of support for the twins to be together at this stage.”

Julia Stovall feels her boys, Alex and James, earn the advantage of both through team teaching.

The boys’ two teachers work together to teach 37 students. This puts the boys in different learning groups but together for recess and lunch.

Stovall said she couldn’t imagine a better situation for the boys.

“When they are together it’s very hard to get them to listen – they get in their own little twin world,” she said. “At preschool one day they were so busy talking to one another that their class went one way and they went another.”

All of the parents said their main concern was working diligently to ensure each of their children felt equally loved and special.

For individual profiles on each of the nine sets of kindergarten twins see ShelbyCountyReporter.com.