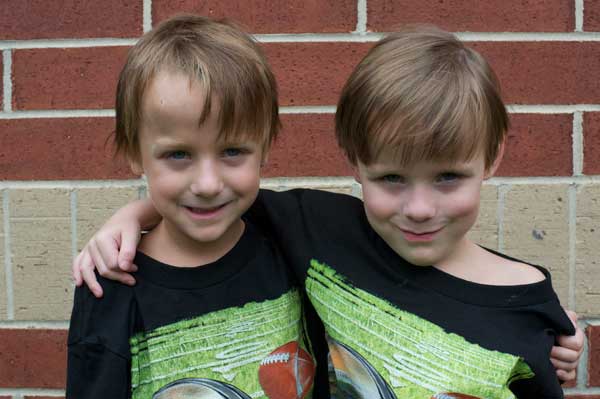 Adam King doesn’t discriminate when it comes to food, but his brother Ian creases his nose until junk food comes around.

The food the twins both agree on is an American favorite – peanut butter and jelly sandwiches.

“They received the peanut butter and jelly award at preschool because they were so close,” their mother Tanya King said. “They have their own friends, but at the end of the day they go right back to each other.”

These 5-year-olds have strongly unique personalities but love each other to no end, King said.

Ian is more of a rule follower and quiet. He’s not going to jump out there and start a conversation, but Adam will, King said.

“Adam is more talkative and outgoing. He’s the one who often gets in trouble for not being quiet,” she said.

While Tanya’s grandmother gave birth to two sets of twins, Tanya and her husband didn’t see it coming when they discovered they were having their own.

“I was very surprised – we found out very early on because I was having some problems and immediately the doctors saw the two embryos,” King said. “It was a big adjustment because we already had a daughter that was 5, so it totally changed her world.”

When Ian and Adam started K4 it was a huge adjustment.

Adam cried for several weeks, King said. The teachers were only able to get him to stop crying by saying if he did, he could go be in the class with his brother.

“For us, personally, we wanted them in class together because they have a fear of being separated – they asked for it themselves.”

Eventually King said she knows the boys will need to grow in their own directions, but she hopes that will come naturally. She does hope they always remain close, as any good PB&J sandwich does.