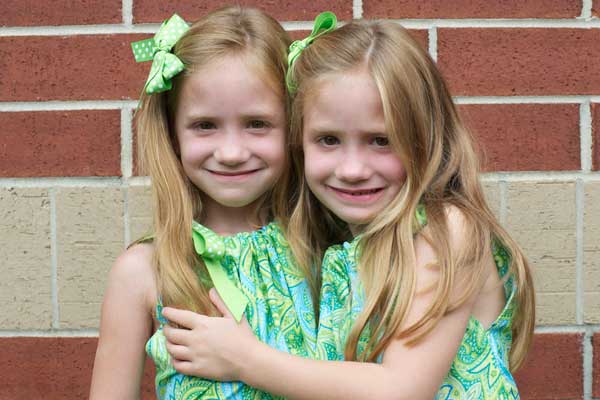 Lori Stovall felt blessed to discover she was pregnant with her second child just six years ago.

The amplified level of sickness she felt even had her convinced her daughter would soon receive the joy of a little brother in her life.

Stovall and her husband didn’t discover until five months along that what they thought was a single heartbeat, were actually simultaneous heartbeats of two baby girls.

“I was overwhelmed,” Stovall said. “My mom was with us through the ultrasound and she just started screaming.”

Even though they are fraternal, it’s almost impossible to tell them apart.

The single distinctive mark is a scar over Haley’s right eyebrow.

Though Haley is the eldest, Stovall said Hannah is her real go-getter.

“She’s the one that will talk to anybody,” Stovall said.

The girls remain in the same class so they can, ‘adjust to going to big school.’

“I want them to be their own person,” Stovall said. “They do a lot of going and spending the night with family members separately. That way it helps them learn to be independent.”

Stovall said parenting two children the same age is much different than one.

“If you think you don’t get much sleep with one, you really don’t with two little ones and an older child,” she said.

Stovall said it has been amazing to watch the two girls slowly become their own people, developing their own likes and dislikes and their own quirky traits.