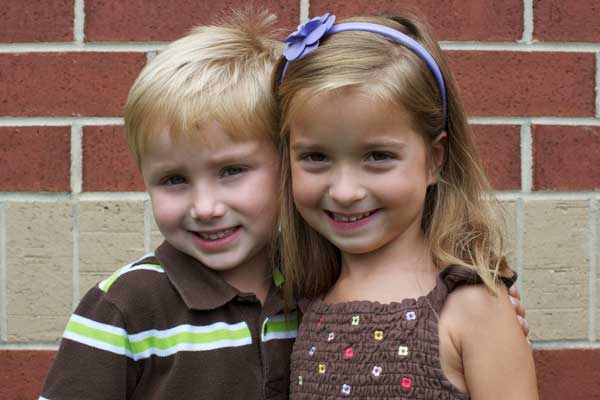 The Preveaux family knew their chances of producing twins were high. Kelly Preveaux’s dad was a twin and so was her mother’s mother.

“My husband, before we had children, always joked around, ‘You know we’re going to have twins,’” Preveaux said. “And he was right.”

She said she still felt taken aback by the prospect of multiple everything.

Preveaux remembers looking at her husband and crying.

“I just didn’t know how we were going to afford twins,” she said. “But it all kind of works out and we were really excited.”

Preveaux said its impossible to not get noticed when you have twins.

Everyone in the grocery stores stops to stare, she said.

And some ask strange questions.

“You’d be surprised how many people look at me and ask, ‘Are they identical,’ Preveaux said. “I’m always so baffled that people ask that – they’re a boy and a girl.”

Conyers even has blond hair and blue eyes, while Maddie has brown hair and brown eyes.

Conyers more willing to raise his hand where now Maddie is more reserved. Maddie is all about dolls while Conyers is of course rough and tough. They will swap up and Conyers will play in Maddie’s kitchen or Maddie will play with Conyers cars.

During the summer the brother and sister always play outside at the pool or ride their bikes together. They even played soccer together for a while. Eventually Maddie switched her attention to dance.

While her twins don’t spend every minute together, separating them was tough for Preveaux who is also a third grade teacher at their school.

“I just wasn’t ready – to be honest I thought Conyers would be more reserved. Their teacher has been absolutely wonderful so I’m happy that they both have Mrs. Thames to learn from,” Preveaux said.

Preveaux said they’ve been lucky so far to not have to deal with much sibling rivalry. Though she does worry about making sure she never compares one to another.

“We know we have to look at them as two individuals,” she said.

By SAMANTHA HURST Jamiee Brown couldn’t imagine what she was getting into with a household full of men. She already... read more