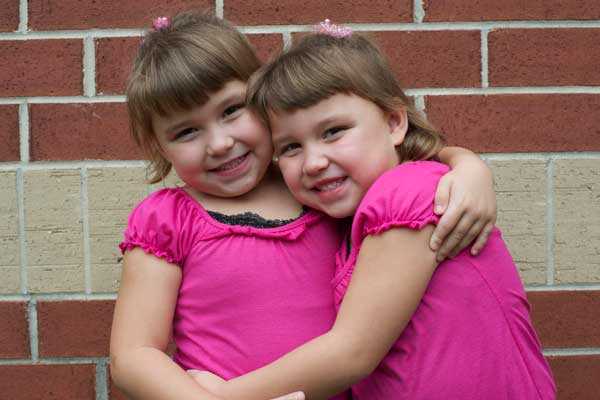 Having a baby, let alone twins, was always a long shot for Alabaster resident Leanne McGee.

McGee dealt with a frustrating health dilemma leaving her without a uterus at the young age of 14. When the yearning for a child grew, she turned to her younger sister to step in as a surrogate.

Doctors implanted her sister with two embryos but the couple was told only one took. What they didn’t realize was that the one embryo that took split into two.

“This was a long shot,” McGee said. “We had a 40 percent or even less than 40 percent chance of even having kids. Our girls are a blessing from God.”

What transpired from the surrogacy was the birth of twin girls.

Jayden and Shayna will turn 6 right before Christmas.

“Before they were born it worried me sick that I would mix my children apart,” McGee said. “If you are around them all the time, you can notice the differences.”

For example, Shayna’s tiny freckle adds a bit of sweetness to her look.

They are totally alike, the same mannerisms and everything, McGee said. They are siblings, though, and that means the occasional squabble.

“They fight like cats and dogs, but don’t anyone mess with one of them because then you have both of them on you,” she said.

The girls can be a conniving duo. Jayden learned early to climb out of her crib and would throw all of her toys into Shayna’s crib. Now that they’re older, the girls play lookout when the other is up to no good.

Leanna and her husband make a point of encouraging their girls’ personalities. They even take the girls on separate errands to bolster each child’s relationship with their parents.

“It is hard as a parent to divide your time evenly,” she said. “We try and make sure they understand that the love is the same.”

By SAMANTHA HURST Lori Stovall felt blessed to discover she was pregnant with her second child just six years ago.... read more