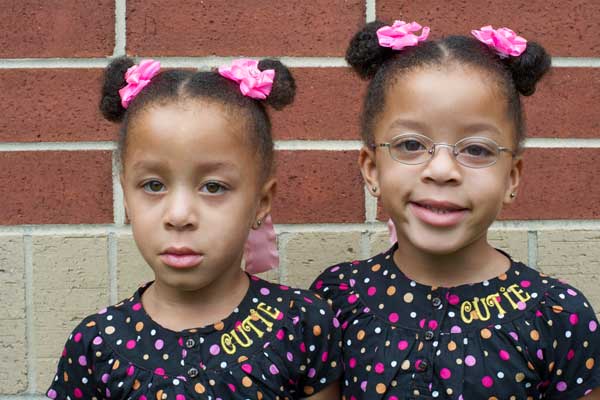 A wide grin spreads across Jerry Smith’s face when he talks about his girls Breanna and Savanna.

Jerry relates to the lives his girls will lead. He too has a twin sister.

“We were really excited when we realized they were twins too,” he said.

His wife Pamela felt a bit more than just surprised.

“I prayed for twins my first go around but I had a boy,” Pamela said. “The second time we got pregnant and they told me we were having twins, I just didn’t believe it. I had to take a seat.”

Pamela said she had to ask the doctor to double check she was in such disbelief.

“As a mom you always know their differences,” Pamela said. “Sometimes I wish I were an outsider looking in because to me I can so easily see their differences and it’s always been that way. They have always seemed like such little individuals to me.”

The girls are both in Ms. Williamson’s class at Creek View. They had been in preschool together – one year separated and one year together. Pamela said they found their own friends but she just thought it would be easier to keep them together for kindergarten.

She said their girls both love ballet and tap classes. They don’t mind getting dirty though. They’re always playing sports outside with older brother Rondell who’s 9.