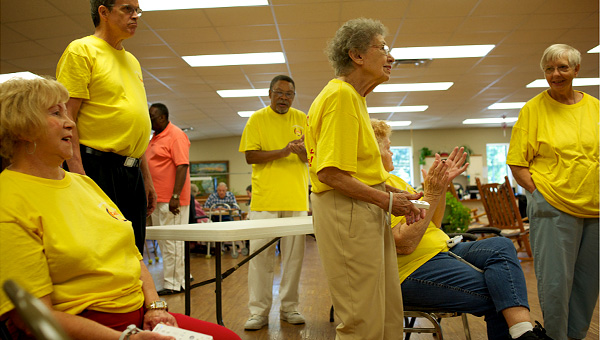 Aileen Williams, the team's oldest bowler, smiles as she watches her ball rolls towards the pins.

CALERA — In the Calera Senior Center Sept. 1, soap operas weren’t playing on the TV, books remained on their shelves and sewing needles had the day off.  Instead, a crowd of regulars gathered around a game station waiting their turn on their new favorite pastime, Wii bowling.

The Calera City Strikers, the center’s Wii bowling team, is just one of the many senior center groups around Shelby County catching the Wii bowling fever.

The Strikers practice at the center every day and are gearing up for a season of Wii bowling tournaments with other county senior centers.

Shepherd said it didn’t take long for the center attendees to catch on to using the Wii, most of them taught themselves. Shepherd said the Wii is very similar to real bowling and they are enjoying the benefits.

“It’s easier on your feet,” Shepherd said. “Regular bowling is a little more in depth, but this is still good exercise. It works your muscles and it’s good for seniors.” 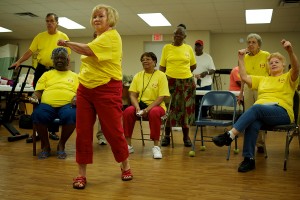 "Yeee!" squeals Lillie Shepherd, raising her hands in the air while Barbara Henley coaxes her ball away from the gutter during a game of Wii bowling at the Calera Senior Center on Sept. 1.

Some of the team members sit in nearby chairs to play, while others use a more traditional bowling stance.

The Wii is now the most popular activity in the center, said Tina Simmons, the center’s assistant manager. However, for a while nobody played it.

“When we got this Wii, nobody wanted to come back here and touch it,” Simmons said. “Mr. Mike started playing and then a few more caught on.”

They really got inspired when another senior center challenged them to a tournament, Simmons said.

“They went out there and kinda got embarrassed because all these other people were doing good and they were not good at all,” she said.

Rising to the challenge, the center members taught themselves how to play and haven’t stopped since.

Even Aileen Williams, the center’s oldest member at age 90, plays Wii with the best of them.

At the next tournament, the Strikers will be sporting their new uniforms— lime green T-shirts with bowling pins on the front. The group raised money for the uniforms by hosting a yard sale.

Despite the draw of the Wii, there are still members who would rather play pool or dominoes, said bowler Barbara Henley.