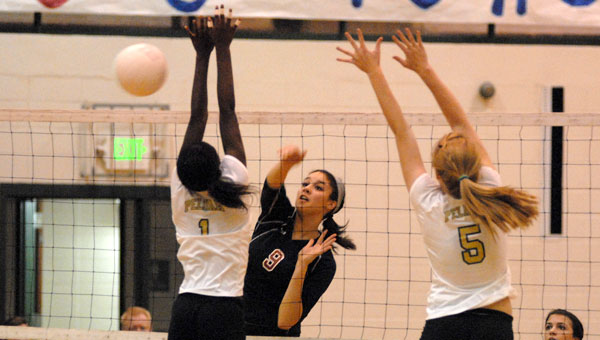 Senior setter Chelsea Payne tallied 25 assists for the Eagles (7-6, 1-0 in Class 6A, Area 10) on the night. Middle blocker Emily Cosgrove and outside hitter Sara Goodwin had eight and five kills respectively.

The Eagles used yet another set of players to get the win.

“We haven’t had the same lineup since the beginning of the season,” Oak Mountain coach Tammy Richardson said. “I don’t even know if this is going to be the lineup we go with. Considering that fact, I think we played OK.”

Perhaps the most telling stat of the night was that Pelham was unable to record a single block, something that caught the ire of first-year coach Haven O’Quinn.

“We have a lot of improvement to do with (blocking),” O’Quinn said. “We’ve got to improve our blocking, and then we can improve our defense.”

Oak Mountain returns to the court Sept. 3 against Thompson in the Mid South Tournament while the Panthers hit the road for their next contest Sept. 15 at Mountain Brook.

Cardwell finished with nine kills and five digs to lead Montevallo to a 25-10, 25-19 win over Shelby County.